Share All sharing options for: Scratching The Chalkboard: FC Dallas at Colorado

I'm flying solo this time and have two major observations from Saturday's game. One of them is more based on the game and the other one is an overall trend that is bothering me.

It's truly amazing just how quickly David Ferreira has been able to re-integrate himself into the FC Dallas attack. Simply put, he's made all the difference. Ferreira, in his second start, again had 5 key passes(tied for the most in any FCD game this season) and had the through ball to Shea leading to the corner that Dallas scored the first goal from and the through ball to Rodriguez that the second goal came from. Both times, Ferreira received the ball near the halfway line and pushed forward into space before playing a pinpoint ball. Simply put, there's no one on this roster and maybe 5 players in the league that can do what he did on Saturday night. Truly remarkable. Let's look at his distribution & heat map. 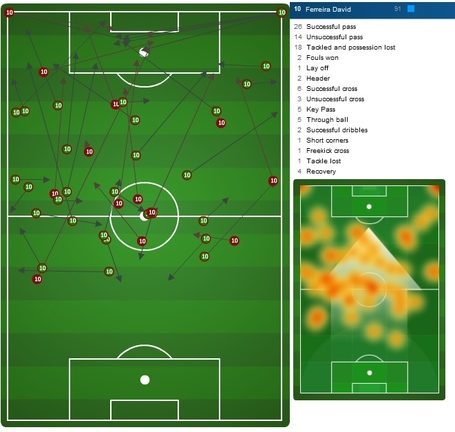 You can't ask for more than that from a player starting his second game in 15 months. Almost always probing forward whether it's on the left side, right side or center and he seemed to get better as this game went on rather than the other way around against San Jose. Also, an underrated aspect of his return has been the service on corners which has shot up exponentially. The scary thing is, David will likely only get better.

Keep reading for something else that's scary, but for a whole other reason

With Blas Perez out for a number of reasons, Schellas Hyndman has had to scramble to find a suitable replacement to play the #9 target forward role in the FCD 4-5-1 system. Lately the choice has been Brek Shea and while it was serviceable in the Chivas game, he has gotten worse as the weeks have gone on and bottomed out Saturday night against Colorado.

While the move Schellas made in the middle of the first half to send Castillo out to the left wing and Shea back to the center certainly paid off, it wasn't because of anything Brek did. I say this not to criticize the young star, he's simply not a target forward, I say this because Schellas must find another option for the position while everyone waits for Blas to return. Let's look at Brek's game on Saturday. 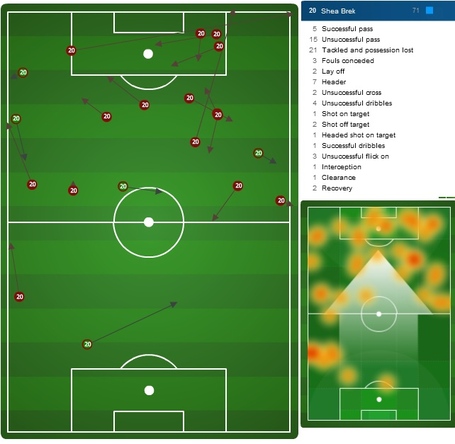 5 successful passes, 15 unsuccessful passes and 21 times tackled with possession lost. Perhaps the biggest problem with Brek in the middle though is how much you lose what he can offer on the left. For me, this heat map/passing grid from the Montreal 2-1 victory where he scored the game winner is exactly what you want from Shea. 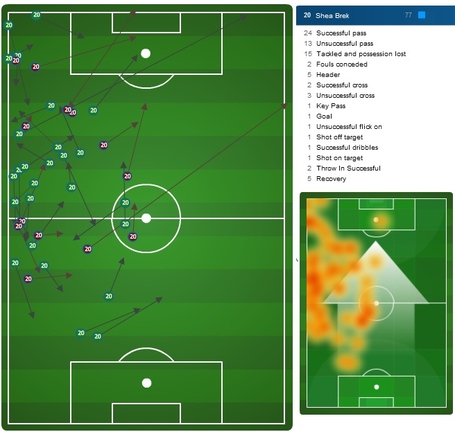 Focused, incisive and with a clear role. That's how Brek Shea should be played. When he's given the "run around and cause havoc" role up top, it has been proven to not come off.