It has been a long time coming for FC Dallas to land a major sponsor. Today they have finally done it as AdvoCare was announced this morning as the club's first jersey sponsor.

AdvoCare is a Texas-based health and wellness company has inked a multi-million dollar, multi-year partnership with the Major League Soccer club.

AdvoCare will be displayed on the jersey where the club's name currently rests. The sponsorship also places AdvoCare on FC Dallas Academy and Youth jerseys.

Edit: FCD will debut the new jersey on July 28 against the LA Galaxy. 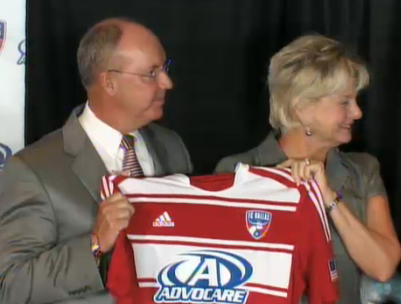 "When we decided to put a company's name on our team's jersey, we were determined to find the right company that was a fit with what we believe in at FC Dallas," said Hunt Sports Group Chairman Clark Hunt. "When I met AdvoCare CEO Richard Wright and his wife Sherry, I knew we had found the ideal partner. We share the same core values as well as a commitment to building champions. Something else that is very important to us is that AdvoCare is a fellow Texas-based company; headquartered just minutes from FC Dallas Stadium. We look forward to partnering with AdvoCare for many years to come."

AdvoCare also sponsors the AdvoCare V100TM Independence Bowl in Shreveport, La., the No. 3 Car in the NASCAR Nationwide Series and the AdvoCare 500, a Sprint Cup series race at Atlanta Motor Speedway.

So what do you all make of this? It wasn't the mega-big name that most of you were throwing out yesterday here but it is a local company, something that FC Dallas has been going for since day one.