I think it's good to take a look at the standings every now and then so let's check out the situation in the Western Conference as FC Dallas reaches the halfway point in the season. 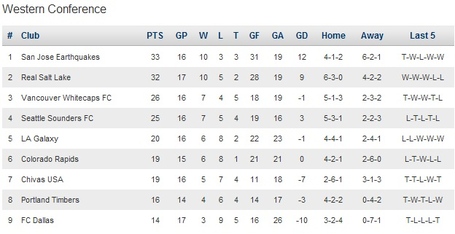 It's obviously not pretty viewing, but some of the things I find heartening are the facts that 12 points separate FCD from third place in the west. When you look at the form guide, only the Galaxy are really in great form right now and most teams don't have the 2 and 3 games in hand on Dallas that was the case a month ago.

It seems like just a few weeks ago that Dallas was tied with LA at the bottom of the Western Conference and now with their great week they've suddenly catapulted into a playoff spot.

After the Toronto FC game on July 4, it's San Jose, Colorado, San Jose, Portland, LA, Portland, Colorado. It's a tough schedule, yes, but it's also a chance to make up a ton of ground against LA, Colorado and Portland(three of the teams above you for that last playoff spot).

Take a deep breath over the next 10 days, because after that it's make or break time.