Share All sharing options for: Scratching the Chalkboard: FC Dallas at Houston Dynamo

Scratching the chalkboard is a regular blog feature where Daniel and Steve look at a few different interesting notes from the OPTA Chalkboard following the game. If you're not familiar, the OPTA stats are advanced numbers that track every pass, shot, etc...and you can find them by going to the MLS Matchcenter for the particular game and clicking on chalkboard. If some of the terminology seems vague, check the Opta Definitions, which lays out the specific Opta meaning of dribble, chance created, etc.

I have been critical of Jackson in the past, because though he usually has an influence on a match, often that influence is a frustrating mix of negative and positive. He kept Mr. Hyde hidden all game on Saturday, and Dr. Jackson was clinical on both sides of the ball and the clear Man of the Match. Here's a map of all his statistical contributions: 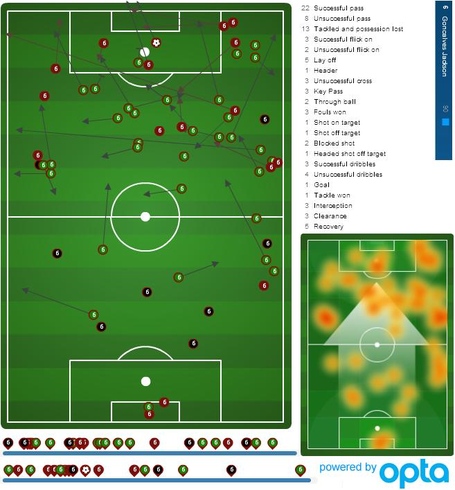 - 22 successful passes, and only lost the ball 13 times while pushing forward throughout..

- His contributions were nearly constant up to Benitez' red card, and he even had some clearly impactful moments afterward as well. There were 4 minutes between Jair's red card and Castillo being subbed out for Rodriguez (pushing Jackson back into an offensive position). He had 3 clearances in the 6-yard box during those 4 minutes.

- Not a single foul. Think about that for a minute. Daniel rightly said pregame that the team would have to keep their cool in a hostile environment. If only Benitez had follow the usually hot-headed Jackson's lead and wasn't drawn into the rough stuff...

Probably the biggest reason FC Dallas has so much success retaining possession down in Houston was because of the lack of turnovers from the squad. On Saturday, FCD completed 340 passes, the third most of any game this season and the second most passes completed in a road game(at Vancouver), but where they were better than they have been all season is the 79% pass completion percentage, the highest such number this season.

Notice in the spray chart from the game just how many passes were attempted and completed in the attacking half of the pitch and also how little red there is from passes coming out of the defending half. 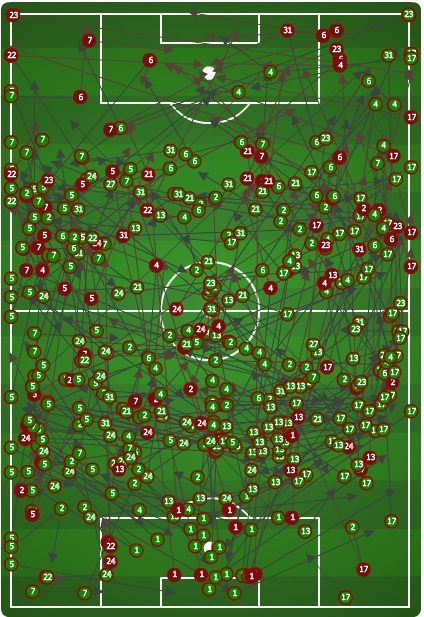 "When you’re playing against a team that has two great central defenders, the best option is to play without a striker." - Johan Cruyff

After Blas Perez was injured in Panama's World Cup Qualifier, Schellas Hyndman was in a tough spot. He had to ask himself if any non-Blas player could win a battle in the box with Geoff Cameron and Bobby Boswell. Based on Scott Sealy's positioning on Saturday, I think that Hyndman wisely chose to steal a page from Vincente Del Bosque (who stole it from Cruyff) and deploy Sealy as a false 9. Look at the heat maps (from ESPN this time, because there aren't Opta Chalkboards for the Euros) of Cesc Fabregas against Italy and Sealy against Houston, both "attacking" the goal to the left: 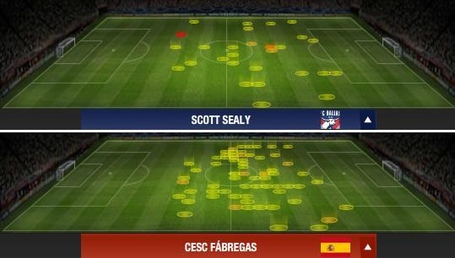 Obviously, I'm not comparing Scott Sealy and Cesc Fabregas in term of skill or effectiveness, which would redefine absurdity. I'm just noting the loose tactical similarity of their assignments. Yes, Cesc covered much more ground, but the general shape of their heat maps are very similar. Both were seemingly asked to take part in midfield passing and run into space in the box rather than occupy it and get pushed around by big, strong defenders. Once you realize that Sealy wasn't being asked to get in the box constantly, his contributions are easier to appreciate. According to Sealy's Chalkboard, he completed 22 passes (one of them creating a chance) and only lost the ball 8 times. Admittedly, very few of his passes were pushing the attack forward, but he was better than most are giving him credit for.

Perhaps the biggest shame about Jair's bonehead red card is just how well he was playing before the red card. You may be surprised to know that despite sitting out the last 25 minutes of the game, Benitez completed the most passes of anyone on the team with 52 and turned the ball over just 8 times, that's a fantastic ratio and he also had the highest heat number(110) of anyone on the team.

I can remember at least two fantastic cross-field passes Benitez played, completely switching the field, something that was practiced in earnest last week, and you've got to love his passing chart. When he's playing like this, it's tough to drop him from the squad even when he is making ridiculous decisions. 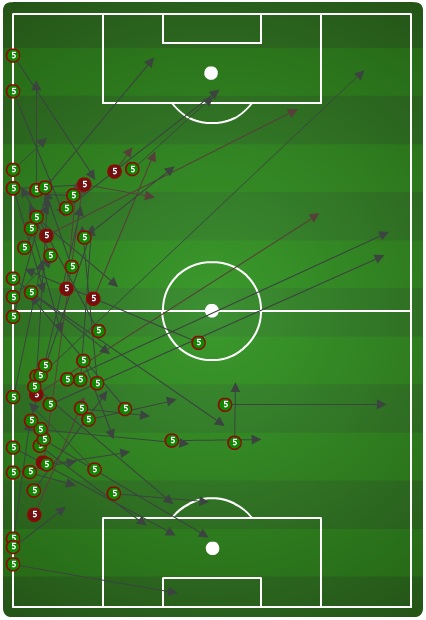 One other note: Hedges impressing

Matt Hedges had 24 combined interception, clearance, recovery numbers on Saturday which was by far the most of any player on the field. Jair Benitez was next with 17 and Geoff Cameron third with 16. It's really amazing how much this guy's game mirrors George John's and it's not unfair to say Hedges is equal or farther along than John was through the first half of his rookie year.