A two week layoff should have been nicer to FC Dallas. The club is still dealing with injuries to key players like Brek Shea, Ricardo Villar, Ugo Ihemelu, George John and Blas Perez. The latter two could see time this weekend but I'm not holding my breath just yet.

Lucky for Dallas, the Houston Dynamo are coming off pretty bad loss to the Vancouver Whitecaps. Mac Kandji scored the lone Dynamo goal in the 3-1 loss last Sunday. Houston was without a couple key defenders in the back - which proved to the league that their depth back there isn't anything to write home about.

Dallas comes into this match on a massive dry spell - no wins since mid-April. Something has to give in this one as they look to be the first club to win at the beautiful new BBVA Compass Stadium in downtown Houston.

1. Can Dallas overcome the heat? Yes we have heat here in Dallas/Frisco. But the swamp heat in Houston is different. Throw in the fact that their new digs creates an oven like atmosphere, it will be tough on both clubs come tomorrow evening. Thankfully it shouldn't be a massive deal as rain has cooled off most of Texas this week. As long as the humidity doesn't rise too high.

I think the real heat will come from the stands. The Houston crowd will be a full one as this game is totally sold out. I've already seen previews of what they are preparing to do in Houston for this one. Houston will feed off this loud crowd and the best way for Dallas to handle this kind of heat is to score early to shut them up.

2. Time to go with speed? Should Perez be out of this one entirely, it could be a chance to go to a 4-4-2 and have pure speed up top. Fabian Castillo is back and healthy according to reports and linking him with Jackson up top may be a decent answer. Here's the thing, like Daniel has mentioned on here, Jackson roams around in the center part of the pitch a little too much for a flank player. I don't love him up top for this club but something about this with Castillo makes a bit of sense to me. Beat this Dynamo team with speed. Vancouver did it last week with Darren Mattocks. Castillo and Jackson are just as bit as fast if not faster than Mattocks.

I'd then have Scott Sealy on the right wing, a place he can do well at. It may not be totally ideal but sometimes mixing things up can do wonders for a struggling team. At this point, what does Schellas Hyndman have to lose?

3. Eliminating the easy chances. This one is fairly simple. In a big rivalry game, the Dynamo will certainly be looking for the foul in their offensive end. Dallas cannot cave in and give up the easy foul. Brad Davis is a master on the set piece and he has too many big bodies to target on those free kicks. You have to feel they will be gunning to go down the middle of the pitch in this one if both Ihemelu and John are out. Nothing against Matt Hedges or Hernan Pertuz but they are a big difference in the middle of the defense for Dallas compared to John/Ihemelu.

Houston will key in on this and look for the foul. Plus, they know how Dallas has been this season with the fouls committed. They know at this point that FCD has a bit of a yellow/red card issue and they will want to key in on that as well. Once again it all comes down to emotional intelligence for FCD. Keeping a level head on their shoulders will go a long way in either coming home with another loss or coming back to Frisco with points.

Davis. He's always lethal on set pieces and if Dallas gives him any big of open space he'll find Brain Ching or Will Bruin and set them up nicely. 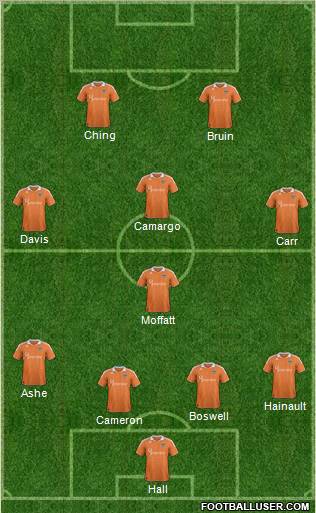 One possibility in the Houston defense to start could be Je-Vaughn Taylor on the right side in place of Andre Hainault. Everything else should be fairly straight forward for Dominic Kinnear.

This one won't be easy. Let's just throw that out there. Thankfully though even with the injuries that are piled up this is a rivalry game which means you can throw just about everything off the table. Like I mentioned above Dallas has to remain smart in this one and not give up stupid fouls in their own end.

An early goal for FCD will go a long way but this club has to close out games better. This is either the start of something good for this club with a win (or even a positive looking draw) or it is just the continuation or what is already becoming a very long season. I'd like to think more positively that this club can grind out a result on the road in a game like this.