This could potentially be one of the weirdest weeks in the 2012 MLS season. It was eventful, very entertaining (when FC Dallas' game wasn't on the line of course) and full of surprises. I'll focus on some of the more interesting matches as trying to give a few sentences on each match's highlights might result in reams upon reams of text.

The biggest midweek match of the season so far took place with the potent Seattle Sounders taking on the LA Galaxy in what looked to be a very exciting matchup of two teams rounding into form. While LA's uninspiring draw against FCD last week might have had some people worried about their continued form, they had acquired seven points in three games. The Sounders came into the match riding high on confidence, having won their prior two matches.

The game itself didn't really produce the fireworks that people were hoping for. LA put together a lineup that more closely resembled a pre-season game while Seattle controlled the game's tempo and flow for the majority of the match. The once mighty, Sounders-crushing Galaxy, whether playing reserves or not, did not look up to the task any point and left three points on the board in a contest where even a tie would have been acceptable.

Bruce Arena's weak lineup, coupled with Freddy Montero's eye-popping strike, will leave fans remembering a match in which the Sounders thoroughly bossed the defending champs and spanked them with a beauty of a goal to boot. Not exactly the plan Arena had laid out, but he had bigger fish to fry (more on that embarrassment later).

That very night not too far away in Buck Shaw Stadium, DC United and San Jose played, in my mind, one of the best matches of the season so far. DC United came in weapons hot, having not lost in seven matches and winning a few of those in convincing fashion. San Jose meanwhile has surprised everyone this season as the class of the Western Conference, pushing Western studs RSL off their pedestal and proclaiming to MLS that this Quakes team is serious.

DC fired the opening salvo, with Dwayne DeRosario poaching a loose ball from Danny Cruz and rocketing it past Jon Busch. Eleven minutes later, the floodgates opened for San Jose, with Steve Lenhart snatching a loose ball right outside the DC box and opens the scoring for San Jose. Two goals later, with shots from Wondolowski and Justin Morrow (really??), the Quakes were fully in control of the match as the halftime whistle blew, leaving DC to fight back from a two-goal deficit.

It is worthy to note that, as usual, Wondo had incredible composure in front of the net and excellent positioning. How many more does he have to score to earn a second call-up to the USMNT? His last time out his form left a little to be desired, but at that point the same could have been said of the entire team. There's not much a striker can do if he's not seeing the ball in the final third. As it currently stands he IS seeing the ball in the final third and currently leads the race for the golden boot with ten goals.

The second half produced no less than four more goals, two more from San Jose. DC's defense simply could not handle the pressure that the Quakes brought to bear. It is scary that one of our Western Conference foes, using our weapons against us (Chavez) is carving up good teams left and right. San Jose in their current form can probably be called one of the best teams in MLS, second only to Seattle.

Chivas USA didn't play their best game (they rarely do) against Chicago, but deserved better than a loss. Chivas finally scored at home, albeit via PK, and while they had given up the lead they seemed poised to take their first points at home. That is until Marco "Assassin" Pappa curled in a lovely shot from outside the box past Dan Kennedy to steal a last second winner. Dan Kennedy continues his campaign for early-season MVP voting, because without Dan "Supreme Leader of Chivas" Kennedy, the Goats could very well be staring at a record as ugly as Toronto's. 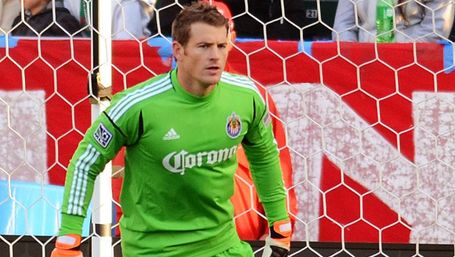 Above: His blood is on your hands, Chivas USA.

DC United recouped their lost points from their loss against San Jose. Mind you they did so against MLS whipping boys Toronto FC, who walked onto the field like proud Gladiators, only to die much in the same fashion (this one coming by way of a 2-0 defeat). I would recap this but it involves TFC losing again which is getting a bit stale, and it would only hurt Reds fans if I remind them that Torsten Frings got injured again. Toronto FC have earned themselves a new record for futility in MLS, going 0-8 to start the season. Good grief.

Montreal might take the cake as the surprise team this week, taking a full three points (away no less!) against Sporting Kansas City, who all of a sudden look a bit vulnerable. Montreal have put together a pretty decent expansion season and they have yet to play a single game in their real home, Saputo Stadium.

While Justin Braun has been of a bit of a bust so far with the Impact, it was his assist that set up Felipe to score the only goal that would be needed for Montreal to win. Sporting looked to be forcing the issue too much throughout the match and this time, Peter Vermes' interviews didn't look quite so carefree as they did during their last loss at Portland. Something isn't quite right in Kansas City as they have been shutout twice in a row, but perhaps this coming week will be the match that shakes them from their attacking doldrums.

The Marquee match was that of "rivals" New York and LA going at it head to head in an ESPN national broadcast. The only goal was a slot by Joel Lindpere in which he was left alone during a run inside the box long enough to receive a pass and get it off in time to score. After that New York simply laid back and attacked on the counter, though if not for the heroics of rookie Ryan Meara, the scoreline would not have held up. The Galaxy attacked relentlessly and only a combination of poor finishing and great goalkeeping kept it level.

Watching Meara organize the defense and parry shot after shot proved very exciting and not just because he made some spectacular saves, but also because not four months ago he was a virtual non-entity. So far during 2012, while much hullabaloo has been made of Thierry Henry's contributions to the Red Bulls (and rightly so), Meara is a strong second as MVP for the Red Bulls' 2012 season.

Meara has stepped up at a time when New York's keeper situation bordered on laughable, a time in which a motley cast of both nobodies and veterans have tried, unsuccessfully, to man the pipes between New York. The kid deserves all the praise he is getting and more and I hope his form improves throughout this season and next. New York may have stumbled onto quite the gem should his play mature alongside with him.

Despite the Red Bulls having topped only struggling LA and not some bigger team, it's safe to say that it was as good a result as the Red Bulls could have hoped for with their superstar striker out of the equation, and doubly so if it means Joel Lindpere is finding his best form again.