FC Dallas returns home for a two-game home stand as they begin another grueling three games in seven days stretch. They host Oscar Pareja and the Colorado Rapids on Sunday evening. Pareja is making his first trip to Dallas since becoming the manager of the Rapids in the offseason.

Colorado lost a midweek game in New England 2-1 where they did not look good. This game came after a big 4-0 win last weekend against Chivas USA. One thing that remains consistent about the Rapids - even under Pareja - is their inconsistent play from game-to-game.

1. What does Pareja bring to the table for the Rapids? When this club is fully healthy I think we'll see more of Oscar's style on the field. He'd like to go with a 4-3-3 with a lot of fluidity and motion between the attack and the midfield. But lately he's had to settle with a standard 4-4-2 that sometimes goes into a 4-3-3. With guys like Pablo Mastroeni out and Conor Casey still getting his legs underneath him here, it may take a few more weeks before we really see what this group is made of under Pareja.

That being said, he has brought in plenty of decent talent. Jamie Castrillon has played well for him so far this season, and so has rookie winger/striker Tony Cascio. I honestly believe that Cascio could be a dark horse candidate for Rookie of the Year. The kid is very dangerous on and off the ball.

2. Stopping Cummings. The biggest thing still going for this club is Omar Cummings. His pace and ball skills are always exciting to watch but what Dallas has to be careful and mindful of is this guy in open space. When he gets room to roam free and run, that is when he is at his most dangerous. Dallas cannot allow him to be open in one-on-one situations and he will use his pace effectively to win every battle.

3. Rapids' South American connection. I mentioned Castrillon earlier. He's been very dangerous this season. Same goes for youngster Martin Rivero. The 22-year old has shown well in the midfield while Mastroeni has been out. His distribution is solid too, something Daniel Hernandez and Andrew Jacobson will have to keep an eye out for on Sunday. Pareja has used his connections well and slowly but surely those connections from South America are paying off for this club.

Pareja also found out this week that Colombian midfielder Harrison Menao is now available to play. His paper work finally came in for the club this week. He's the third Colombian on the Rapids (after Castrillon and defender Luis Zapata).

Jeff Larentowicz. Big Red is always a force to deal with in the midfield and has consistently been one of the best players in MLS over the last few years. He's strong in the air, physical in the open field and has strong vision to find open teammates. He's one of those few players that I would absolutely love to see play in Dallas one day. 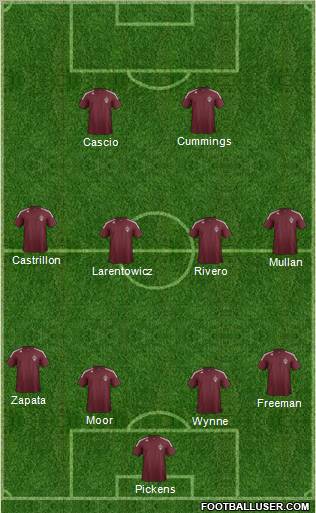 Mostly the same lineup as on Wednesday in New England. Marvell Wynne could return to the lineup but if not expect Tyrone Marshall to fill in with Drew Moor. Again this lineup kind of shifts into a 4-3-3 with Rivero and Castrillon moving more into the attack. And if Mastroeni somehow returns this Sunday, expect him in there over Rivero and will become a 4-3-3.

Lastly, Conor Casey could somehow start. He didn't play on Wednesday and I could easily see him in this game. More than likely though he'll come in late off the bench.

I think we mentioned it a few times this week but this one is another must-win game for Dallas. Just about any home game from here out has become that in my mind. Dallas is unbeaten at home this season and given how tightly wound the Western Conference is this season, three points are huge.

Dallas has done well in recent years at home against Colorado and given the current form of Pareja's bunch (1-4-0 in their last five), you do have to like Dallas' chances on Sunday.