It was a slow Friday afternoon and then BAM, the Major League Soccer Player's Union had to go and release their 2012 player salaries. Naturally the world flocked to the website to take a long look at this list.

FC Dallas made a few moves this winter and we all were curious as to how it would hit the bottom line for the salary cap. Also when news broke that Brek Shea became a "Young DP", that made seeing this list even more interesting.

There are few surprises with this club in terms of salaries but a few worth noting. 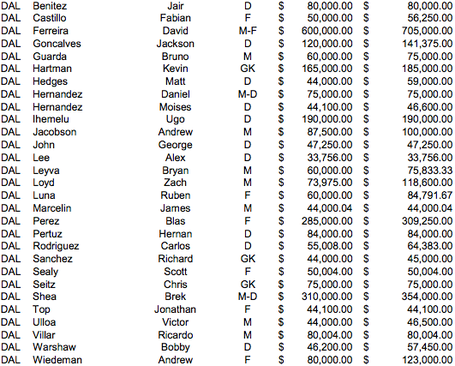 So Shea is at $310k, newcomers Blas Perez at $285k, Hernan Pertuz at $84k, and Carlos Rodriguez at $55k. Overall, those three additions from this winter are pretty good at the bottom line. Perez we all figured would be high in the salary range but kudos to FCD for landing Pertuz and Rodriguez at manageable rates

Of course the big shocker for everyone else around the league will be centering around George John's salary at $47k. Naturally he'll come in on the All MLS Under 100k team. So will Zach Loyd at $73k.

I think Dallas fans will also rest easy seeing Daniel Hernandez's numbers go way down to $75k for the season. That restructured deal as a player-coach was a very smart move on the club's part.

One big shocker to me was seeing Jackson Goncavles at $120k - that figure seems a bit steep for a player with jekyll and hyde tendencies.

Ricardo Villar at $80k seems about right to me though.

Lastly, the big number, David Ferreira taking up a big $600k (obviously his DP tag lowers that number on the books).