Share All sharing options for: OptaHunt: The real MLS table, and bad news for FC Dallas

Today the standings on mlssoccer.com show FC Dallas 7th in the Western Conference, and only 3 points out of the all-important fifth and final playoff spot. Don't get a false sense of optimism from that sentence, because it is quite misleading. Dallas has played 2 or 3 more games than all of their playoff competitors, and thus squandered more opportunities to pick up points, and are left with less chances to make up ground.

Points Per Game (PPG) is a much more accurate way to show a club's real standing when unequal numbers of matches have been played. Below, I calculated PPG and Goal Differential Per Game (GDPG) for the Western Conference. Also, I added in a very simple metric for how many PPG each club probably needs to have a good chance at making the playoffs. I set the playoff point target at 46, since Sports Club Stats' simulations give every Western club 50+% chance to make the playoffs at that level (certainly possible the actual cutoff will be higher or lower, but it should be in that neighborhood). Thus I calculated "PPG needed" by subtracting current points from 46 and dividing that by 34 minus games played. 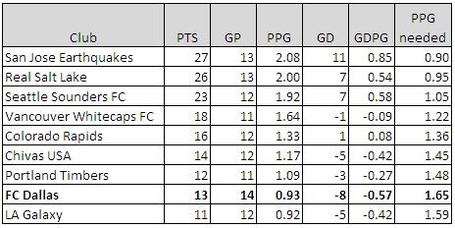 More numbers and implications after the break.

The bad news here is pretty obvious. Only .01 above the worst PPG, and the worst GDPG and the most PPG needed in the West. Basically they have to flip from horrible to very good, and fast. Sports Club Stats is quite justified in placing FCD's playoff odds at 6.6% today. Anyone who remembers 2009 FC Dallas (whose impressive late surge wasn't enough to overcome a bad start) will be disheartened to hear that the team back then likewise had 13 points in their first 14 matches.

Dallas' remaining 20 opponents have averaged 1.44 PPG and a slightly positive GDPG thus far (numbers lowered by a match vs Toronto). Barring epic collapses, San Jose, Real Salt Lake, and Seattle are out of reach. FC Dallas has to overtake all but one of Vancouver, Colorado, Chivas, and Portland, while holding off the Galaxy.

The good news, as Daniel pointed out to me on twitter, "@optahunt on the flip side, when you need to make up points, great that your games are against the West. Things can swing quickly." Of the red stripes' remaining 20 matches, 11 come against their rivals for the 5th spot. Unfortunately, all of those clubs have talent, and won't go down easily. But let's be optimistic and say Dallas gets 22 points from those 11. If damage to their rivals and improvement to their tiebreakers drives FCD's postseason cutoff down to 44, they'd only need 1.00 PPG from the other nine matches (7 of which are against RSL, Seattle, and SJ).

They could also catch up on the playoff odds with a fantastic run of form very soon. If they get 10 points from their next 4 (at RSL, at Houston, Chivas, and Toronto), their needed PPG becomes a much more manageable 1.44. A swing the other way would be just as possible though, as 6 points in those 4 would move needed PPG up to 1.69.

Keep in mind that all of the scenarios in which Dallas makes the playoffs involve a radical shift in results, Hopefully, injuries heal and referee/suspension/luck issues regress to the norm very quickly and dramatically. Otherwise, FC Dallas only have the El Capitan and the US Open Cup to play for the rest of this year, both of which will be decided mostly during June. If next month isn't a huge success for FC Dallas, the rest of the season is likely to be very long indeed.