FC Dallas hits the road for yet another midweek game. They take on their Brimstone Cup rivals, the Chicago Fire, in the only regular season meeting with their Windy City rivals.

Dallas is currently winless in their last seven games while the Fire are coming off a tough loss to the Portland Timbers this past Sunday in Oregon.

So saying all of that, time to get down to the nitty-gritty.

1. Battling the inconsistency factor. As someone who pretty much follows every club and what they do over the course of the season, I want to like the Fire. Yeah I said it, don't shoot me. But the thing is this club reminds me too much of the Colorado Rapids of the last few years. Good but not great and wildly inconsistent. This Chicago team hasn't won a consecutive game all season long. They have gone some stretches where they haven't lost in a few games (like they did before they stumbled at Portland) but overall this group can't seem to get it together consistently for 90 minutes at a time.

Blame it on red cards, injuries, whatever. Dallas fans know better than anyone what those two things can do to a club. Chicago was good enough to win in Portland on Sunday but an own goal did them in and tough pressure early on from the Timbers was also too much.

2. How does Dallas slow down the attack? One thing is clear with this bunch, when Marco Pappa, Sebastian Grazzini, Patrick Nyarko and our old pal Dominic Oduro are all on one page, this offense is fun to watch. Thing is when you play the Fire, if you go physical against them you stand a good chance of knocking them off their game.

So far in their losses or draws this season, the teams that have had the most success against the Fire have played them tough up front. Dallas has big defenders like George John and rookie Matt Hedges, which is good, but they also have guys that can slow down and stay with Oduro and Nyarko's pace.

The big thing will be to eliminate the open field the Fire get the ball in. Their midfield set up is a little different than most as it uses three guys sitting behind Oduro and two holding midfielders behind that.

Just like Oduro and Nyarko, if you play Pappa physical he typically comes off his game. Dallas will need to be careful though in the physical game - seeing how they've racked up a good amount of suspensions so far this season - referees know they are good to commit fouls.

3. The short rest. Both teams played over the weekend, Chicago even played on Sunday. Now both have Wednesday games and weekend matches to deal with so the short rest will be a factor tonight. Dallas getting one extra day to prepare for this could help in the end. With the injury and suspension issue this club is dealing with right now, these three game stretches are absolutely brutal to deal with. Heck even most healthy clubs struggle with these stretches in the schedule.

So what can Dallas do to overcome it? Simple, eliminate the mental lapses. It is the small things that come to play in these situations too. Good teams overcome it, bad teams melt in it.

Speed. Simple enough, the speed can kill from the Fire. When that quartet up front is on their game, this group is as good as any in the league. 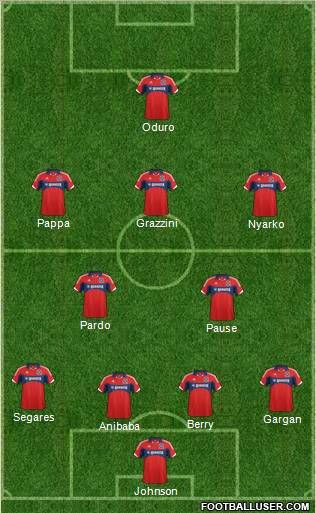 Notes: Just about what the Fire used in Portland. Logan Pause and Pavel Pardo sit behind the main attack. Sometimes Pause goes more out on the right hand side like a flank player but he does better inside. You could see Orr Barrouch in the lineup as well in place of Nyarko since the club is coming off short rest.

I feel like a broken record but at this point it has to be said once more - Dallas has to win this game and they have to do so without giving up any more silly red cards. The month of May has been a long and tough one for this club. But the light is at the end of the tunnel. This club needs momentum going into Saturday's game in Salt Lake. They've had good success in the past against the Fire and at Toyota Park. It is time for the veterans to set up and lead this club back to the right page.