Share All sharing options for: Scratching the Chalkboard: Philadelphia Union at FC Dallas

Scratching the chalkboard is a new feature where Daniel Robertson and Steve Fenn look at a few different interesting notes from the OPTA chalkboard following the game. If you're not familiar, the OPTA stats are advanced numbers that track every pass, shot, etc...and you can find them by going to the MLS Matchcenter for the particular game and clicking on chalkboard. Click to enlarge any image for a larger version.

Steve's first observation: Outside of set pieces, Leyva needs to do more

We're all excited to see that Bryan Leyva looks poised to take set piece duties away from Daniel Hernandez. Let get that out of the way immediately. The kid created 3 chances on 5 corners, which is worth getting excited about. But, let's remove those set pieces, and see what he contributed in the run of play. He only had 8 successful passes, and lost possession 11 times. If you normalize everyone's heat score (measuring the amount of ground they covered) to 90 minutes, Leyva's was only 67, which is better than only Hartman's 46 and Blas' 47. None of those numbers are as anemic as Castillo and Jackson's lazy day in Columbus, but they're not great either. I get that he's only 20, the set pieces are exciting, and that he gave an effort on defense for once. Dallas needs more from their wings in the run of play than Leyva provided on Saturday, though. However, he did enough to warrant more opportunities amidst all the injuries and suspensions this week. If he doesn't step up a little more, he might not get off the bench much after a couple of teammates become available again. 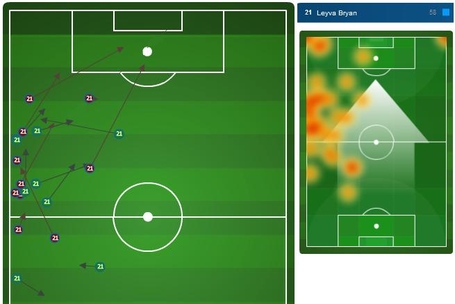 It's got to be so tough out there for Blas as basically one guy trying to do everything in the central attacking midfield portion of the game, but on Saturday night, despite the goal, he struggled to get going. Blas completed just 11 passes on the right with just three unsuccessful passes, but for a forward it's almost worse if he's not passing the ball at all than if he's trying things and they're not coming off.

The biggest problem of Blas' game on Saturday was the fact that almost every one of his passes was backwards. I've attached his pass charts for the past two games and also included headers that went to the other team as I feel like any time a forward wins a header, it's probably a good play whether it's intercepted by the defense or not. Notice the stark contract is where his passes were going on Saturday as compered to last Saturday in Columbus. Blas is probably the last guy we worry about with relation to the offense, but Saturday just wasn't his day. 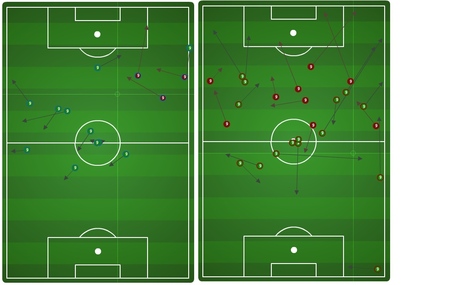 Dallas stumbled into an advantage of their makeshift lineup on Saturday. Alongside regular starters that head the ball well, James Marcelin and Matt Hedges make FC Dallas very difficult to beat in the air. Dallas got their heads to 52 balls (including their goal and 2 other shots), while Philadelphia only did so 39 times (also including a goal and 2 other shots). Most of the hoops' aerial work was done by Marcelin, Hedges, John, Jacobsen, and Perez, who combined for 42 header. If you look at the graphic below, with the field split into thirds, you'll see that Dallas' most pronounced advantage was on headers in the final third, with the red stripes heading 16 in their attacking area, while the Union only got to 4 in theirs.

Worth noting that Opta doesn't identify every header in the Chalkboard. Clearances don't distinguish between kicks and headers, which is unfortunate because it prevents us from calculating ratios for winning headers, which would be a useful metric. That said, this looks to be one of the few things the current crop of replacement players does quite well. Hyndman should continue to press that advantage by positioning Marcelin, Hedges, John, Jacobsen, and Perez to be most useful on offense and defense depending on the situation. Everyone else should be encouraged to lob balls at the those guys whenever other offensive approaches aren't working. 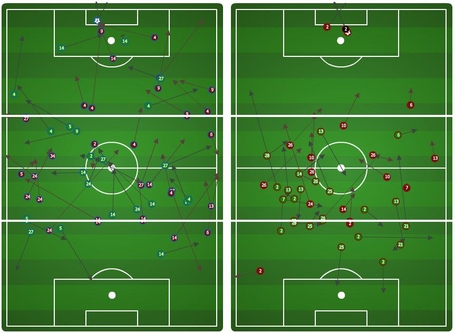