The Union have lost three straight games including a 3-2 loss last week at home against New York. A game in which the Union had a 2-1 lead at the half before giving up two late goals and seeing Freddy Adu get a second yellow card for his dive in the penalty box.

Neither team has any sort of momentum coming into this game so it will be interesting to see which one takes hold of this game.

1. The offense that was just isn't anymore. The last two seasons you thought of a tough offense when you saw that your club was facing the Union. That was largely due to players like Sebastien Le Toux but now that he is gone, the Union are having to rely on other players stepping up and scoring.

So far this season the Union have seven goals - which is good for a spot near the bottom of the league. Lionard Pajoy and Gabirel Gomez - two new faces this season - lead the club with three goals apiece. Without Adu for this one, the offensive distribution from the midfield will be taking a hit. In the last game Adu was given a more free flowing direction in the attack and was about to set up Pajoy on his two goals against the Red Bulls.

2. What can Dallas do around this defense? The Union have had to shift in a couple different guys to their defense from last year. Sheanon Williams is now playing more centrally while rookie Raymond Gaddis is covering on the flank at full back. Carlos Valdes is still the rock in the defense, he made Danny Califf look great last year and I'm sure he and Williams will eventually be a great duo there for them. Dallas needs to concentrate on play through the wings and using their speed to break down this club. I like Gaddis and Gabriel Farfan but both are young and Dallas has the experience to expose them.

Also, this has to be a game where Blas Perez asserts his size and physicalness with Williams and Valdes. He'll probably get covered a bit by Brian Carroll or Gomez but look for him to be a big factor in this game.

3. Possession key, but smart set pieces are vital. Possession is definitely key in this one but not the main means to three points. Dallas needs to be smart on the ball through the midfield and not give away any silly mistakes in the back. Even without Ugo Ihemelu and Zach Loyd, there is still a ton of confidence in this defensive group to lock down the Union. The big key is not giving up set pieces and converting set pieces of our own. Dallas has been horrendous on set pieces this season but have been better in recent games with Jair Benitez handling more of the duties.

X-Factor for the Union

Danny Mwanga. The kid hasn't registered a goal yet this season and is lacking in shots on goal as well but I still see him as a factor. Without Adu someone has to help step up in the creative department and he could be the guy to do that. 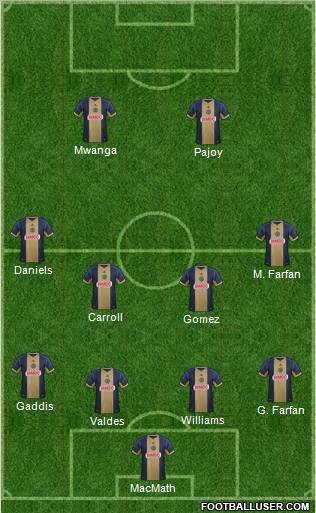 Mostly the same lineup as last week against New York, minus Adu. Michael Farfan is set to return from his three game suspension so he should slot into the lineup for Adu. The club is still without Roger Torres, a natural right midfielder. Newcomer Michael Lahoud could be a good choice for right mid as well but I don't see him getting a starting nod this quickly under Peter Nowak.

It is three points or bust in this one - for both sides. Dallas has to remain intelligent in this one. I've been saying all week that the injuries are one thing but the suspensions that this team is dealing with are really becoming the bigger issue. Schellas Hyndman needs his club to be smart out there on Saturday. Clubs are starting to realize that Dallas is a team that they can frustrate real easy if the referee is calling the game a certain way. It happened in Columbus and it has happened plenty of times before that.

Emotional intelligence is a major thing for Dallas at this point. If another game passes that sees a red card or a yellow card that leads to a suspension (looking at you Benitez and Daniel Hernandez - both are getting close to that next yellow means a suspension level) you have to think Hyndman could be forces to make some moves here.

Again, its three points or bust.