Opta statistics are opening up many new ways to evaluate MLS, and thankfully some sharp analysts are very generous with their finding. Devin Pleuler runs a regular column on mlssoccer.com called Central Winger in which he breaks down the game empirically in new and interesting ways. The other day he ran a column on pass completion broken down by field location. When I asked for an FC Dallas breakdown, he was nice enough to generate and send me such a file that night.
Below is a visualization of 2012 MLS clubs' passing overall, followed by FC Dallas alone. The only change I made to Devin's graph was adding a grid and labels to make discussion easier. Circle size is a measure of the number of passes originating in that region, and bright green means high percentage, while dark red is low percentage. Teams attack right to left (10 to 1). 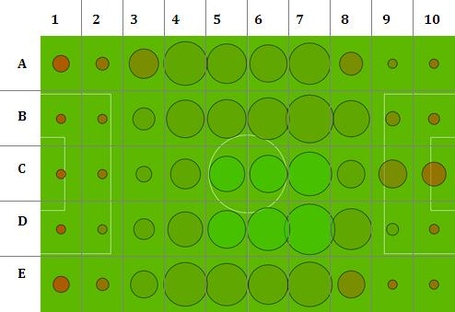 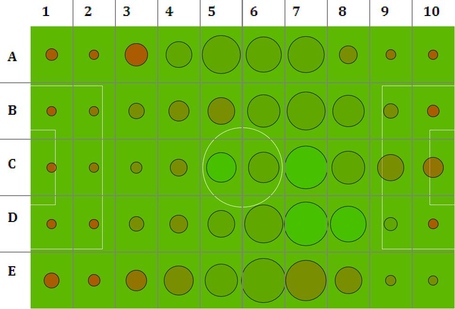 Analysis after the jump:

So, what do we make of this? As Devin pointed out after tweeting the FC Dallas image: "@OptaHunt Certainly not the prettiest of the graphs, but it's balanced. They very much look like a counter-attacking team." At this point of the season, data gets to be a very honest reflection of a team's tactics. Through 12 games this club routinely launches low percentage passes from the back and has far below MLS average in passes in their offensive half. This isn't an inherent problem, it's just the tactic Hyndman has been more or less forced into by injuries to his playmakers. Please note that injuries, suspensions, callups, and positional flexibility make it difficult to attribute a zone's passing to performance to any one player. If you want to attempt to do so in the comments section, at least check the number of minutes played by FC Dallas players this year.

The differences come mainly in the midfield, as columns 1,2, 9, and 10 are pretty much identical between FCD and MLS average. We've all been quick to key on Hernandez and Jacobsen's struggles this season, but everyone has been passing pretty well out of defensive midfield positions. Dallas' passing in columns 7 and 8 are pretty well on par with the general MLS pace, which is nice because it seems we don't have to worry too much about badly placed turnovers. Looking at this visualization, it becomes clear that for the most part Dallas bypasses the center of the pitch, though. Almost every sector in columns 3, 4, 5, and 6 shows less passing attempts, and most of them are completed at a lower percentage. In particular, look at the pocket (B3:D4), which Daniel investigated in one match during Scratching The Chalkboard: FC Dallas vs Real Salt Lake. The section of the field which should be occupied by a #10 is a wasteland of scarcely attempted passes that connect with teammates at a lower rate than the league average.

On a level, Hyndman is smart to concede areas where his available players probably couldn't (and don't) win passing battles anyway. Counterattacking certainly seems to be the most appropriate strategy for the motley crew that's been available most weeks in Frisco. Unfortunately, that approach rarely leads to consistent production, leading to a talented Dallas team sitting 13th and 14th in goals per game and shots per game, respectively. This team should be interesting to watch as Villar and Ferreira get healthy again. If either or both of those players return healthy and in-form, offensive strategy and execution could change dramatically.

See any relevant differences or similarities that I missed? Any alternate interpretations? Please chime in below. Oh, and if you enjoy this type of analysis, you should be following Devin Pleuler on twitter and reading his column regularly.