My roadtrip to Columbus

Share All sharing options for: My roadtrip to Columbus

Pittsburgh isn't a good place to be an FC Dallas fan. 90% of the populace are Steelers zealots, who sometimes tolerate hockey and baseball. When I tell someone that "I occassionaly contribute to a blog dedicated to my favorite MLS club, FC Dallas," they likely won't even recognize 3 of those terms. There are some advantages to my location, and among them is the occassional chance to see my favorite sports teams in hostile confines. Even when the results of such a match are frustrating, for me the journey and atmosphere are more memorable than any other sports experience.

I set out Saturday afternoon with my friend, Bear, who was an excellent travel buddy. We had a fun drive talking about our expectations for the match and our soccer. Bear was a goalie in high school, and coached and refereed youth soccer after that. He's not a fan of any MLS club in particular but is such a fan of soccer that he bought MLS Live this year just so he can pull up a match any time he wants on his iphone.
After 200 miles we arrived at the house of another friend, Michael, who had dinner ready ready for us soon after arrival. After all that time on the road, it was great to have a meal that didn't come from a drive-thru or a concession stand. Like Bear, Michael had played much more soccer than me at a young age, and it was fun to get both their perspectives throughout the evening. After getting shooed away from a free parking (darned police dissuading people from walking across train tracks!), we got through traffic and found got to the stadium with 30 minutes to spare.

Crew Stadium is the first soccer specific stadium ever built in this country. It's construction in the winter of 98-99 cost $28mm, which was funded entirely by Lamar Hunt (Houston's new BBVA stadium is being lauded for only costing $95mm). The US is undefeated in 6 World Cup Qualifiers played there, including La Guerra Fria and 2 others against Mexico that all ended dos a cero. A UK magazine, Stadia, named Crew Stadium the most influential stadium of the 21st century. Up until recently the settings of soccer matches in this country were decided almost entirely by convenience, so when I sat in those modest steel bleachers, I looked out on the most storied pitch in the history of US Soccer.

When we first saw Crew Stadium from the highway, Bear said, "Well, that's not what I expected." He had envisioned a more polished, impressive edifice. Crew Stadium always reminds me of Clark Field in Plano, where I played a little football in middle school and high school. To get Crew Stadium built for $28mm, it seems every expense was spared, and basic, utilitarian design was the order of the day.I don't say any of that to trash the place, it's just the way it is, and is kind of charming once you get used to it. For me, the steel stands are emblematic of the whole structure, because they are so basic, but make a huge noise even when only a modest crowd is stomping on them. The Hudson Street Hooligans to the East of the stage lead everyone in chanting and jumping up and down at appropriate times, and the reverberations of their din gets everyone else into the match very well.

After the jump: my in-stadium observations of the match

Upon reaching my seat, I looked to my left, right, and behind me. The only red shirts to be found were a couple Ohio State fans who didn't check the opponent's colors before coming to the match. I thought, this should be fun, and I'm definitely going to need a beer. I hopped up the stairs and found that there was a Crew-branded red lager for the ridiculous price of $8. I got a good deal on the ticket, so an over-priced beer was fine by me on this occasion. Now that I was officially repping the Dallas Beer Guardians remotely, I returned to my seat. My friends were to my left, and some passionate Crew fans were on my right. Luckily, they were the kind of self-aware fans that were willing to have friendly conversation when we weren't passionately screaming opposing viewpoints on the referee's bias.

Daniel's done a great job of summarizing the main points of this match, so I'll just highlight a few of my live observations. I should note that I was in the fourth row about even with the top of the North penalty area, so I had a good view of all three goals, but a pretty poor angle on both of Zach Loyd's yellows, or anything else toward the other end of the pitch.

After the final whistle, the Dallas players, who had looked exhausted for most of the match, abandoned all pretense of energy and trudged to the tunnel. Few of them looked anywhere but the ground or the locker room door. Toledo walked off the pitch without hearing complaints from anyone, it seemed. The Crew fans had been highly critical of his few pro-Dallas judgements during the match, but either their contentment with a win made them forget, or they realized by the end just how lucky their club had been. 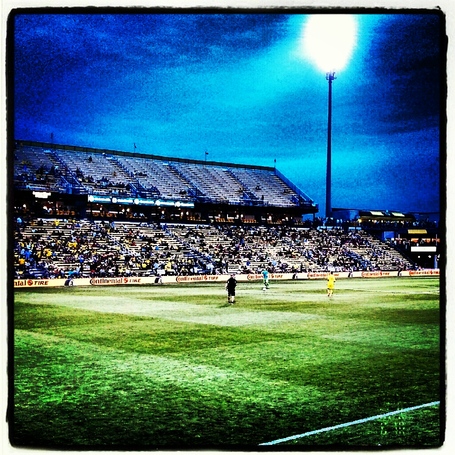 My companions had a great time, though their being a neutral and a Crew fan certainly made that easier. Michael said that Columbus had drawn or lost every other time he went to a game, and Bear was just happy to have had the chance to see a live match. As we walked to the car, we had a good time recounting the exciting moments of the match, and bemoaning the persistence of the girl who had decided it was her duty to heckle me. Parking lot traffic wasn't bad, and we were able to drop Michael off at his house quickly and get to the highway by 10:00.

Bear's experience as a youth referee did make him resent Toledo's influence. During the drive home we discussed the MLS Disciplinary Committee, and after he watched replays on Sunday he conveyed that he was looking forward to the league's judgment against Meram. He was also particularly unimpressed with Toledo following Castillo off the pitch until he had an excuse to give him a yellow card. In Bear's judgement, that match deserved cards when it started getting physical early in the first half, and without that discipline, it got away from him quickly. On the three and half hours back to Pittsburgh we discussed our impressions of the match, the different ways the two of us analyze the game, and all sorts of other topics. Without pleasant conversation, I would have been stuck in a bad mood the entirety of that drive. I highly recommend traveling to see FC Dallas in a hostile stadium, but if you do so, be sure to bring along pleasant company.