It's becoming a broken record. The current six game winless run has seen highly questionable refereeing, relinquished leads, red cards and defensive lapses but generally in different games. We had all four of those in one game tonight at Crew Stadium in Columbus as FC Dallas lost 2-1 to a Crew side that had not won in five games.

Things started out fantastically for FCD as Fabian Castillo got them on the board midway through the first half with his first goal in almost a full calendar year. Everything went to hell in a 20 minute span towards the end of the first half and middle of the second half where Zach Loyd picked up two yellow cards, Justin Meram committed at least three yellow card fouls but was shown only one yellow card and Columbus found two goals brought on by some sloppy FC Dallas defending. Another game, another loss and FC Dallas slides towards the bottom of the Western Conference with only Portland below FCD based on points per game. My thoughts on a highly controversial evening:

Uncharacteristic defensive lapses Throughout everything, as the offense comes and goes, there's always been the extremely stout defense. While it's very harsh to fault a defense when they're playing down a man, its now three games in a row of multiple goals allowed and just one shutout this season in 12 games. After 12 games last year, FCD had six shutouts. Obviously that's a little much to ask, but for a defense that is still very close to the same as last year and 2010, you expect this group of veterans to start keeping some clean sheets. I don't think I've ever seen a header scored from outside the box before.

What's wrong with the offense They broke the scoreless streak tonight, but the offense was still very poor overall. I think the biggest problem is that there are a bunch of individual attacking players, but there is just no team attacking play going on right now. Everyone is trying to beat three guys rather than passing to the open man and making a smart followup run off the ball. It worked once tonight, but most of the time it's just too easy to defense.

Shea is more of an individual attacker, Castillo the same, Jackson the same. Blas is more of a team guy, but it feels like he's almost thinking on another level than these guys in terms of link up play. The glue that held everything together was Ferreira who always made himself available and always played the smart pass, Villar the same to a lesser extent. Without that linking piece, it all goes to hell. Three shots on goal tonight and I can only remember one of them which tells you all you need to know. I'm not even sure the thing can get fixed this season either without Ferreira or Villar stepping up. Hate to be negative on this one, but it's just dawned on me tonight that there's all these individual guys, but not much teamwork at all.

Wildly inconsistent refereeing I'm not blaming this loss on the referees and I hate to sound whiny, but I've got to say this. Zach Loyd's red card was deserved and clumsy play, but the problem is when Loyd is sent off for two soft yellows while Justin Meram commits one red card offense and two more yellow card offenses but remains on the pitch. Inconsistent is the worst thing a referee can be and tonight there was none. Let's take a look at some plays:

Jacobson Yellow Card(sorry for the picture, go full screen on the twitvid's for better view):

OK, it's a bit soft, the elbows were up. Yellow card and move on. Now Jacobson is elbowed by Justin Meram :30 into the second half. Was it intentional after AJ's right before halftime? Who knows but it's an almost identical play, yet the yellow card is not shown.

Then, of course, is the moment everyone will talk about. Meram's boot to the throat of Pertuz pictured at the top of the post.

Blas Perez has been suspended twice in recent weeks for inadvertent dangerous plays. If you set the precedent that a dangerous play that is completely inadvertent is a red cardable offense, then there's no way around this not being red. Meram was never CLOSE to the ball and 100% follows through. I can remember Brian Dunseth saying if Blas Perez had pulled his foot out a bit in the Colorado game he wouldn't have been shown red, but he didn't. This is the exact same situation. The ball is away and he still follows through. Now the third yellow card. First we'll watch Loyd's ultra soft first yellow card.

If that is the precedent you set for a yellow card, then surely a completely unnecessary kick to the knee is a yellow card.

If it was just one game, it wouldn't be quite so frustrating, but this is the third red card in three games for Dallas while Meram, who should have been off, scores the game tying goal.

Still confident I know there's plenty of doom and gloomers out there in the Twitter world, but until we see whether or not Ferreira returns, I am still confident in this group having the potential to cause damage in the MLS playoffs. Ferreira is the key and he's about a month away if the timeline is still accurate. FCD is currently in a stretch of 9 games in 36 days. They play two MLS games in the month of June. We're 12 games into the season, now is no time to quit. 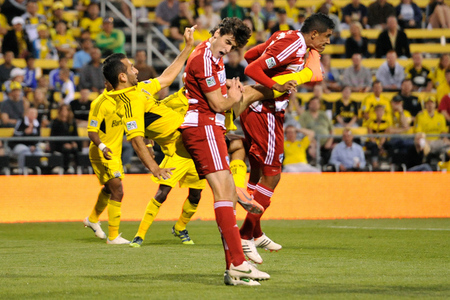