Share All sharing options for: Scratching The Chalkboard: FC Dallas vs Seattle Sounders

Scratching the Chalkboard is back after ignoring the last game. There's really nothing you can take from a chalkboard of a team down to 9 men for an hour that has any bearing on future performances. Wednesday night's game, however, there is tons we can glean from the OPTA stats. Steve Fenn and I dug into the match's chalkboard, and here are our findings:

Per request from @shuttrking, I went to the chalkboard and compared the recent contributions of James Marcelin and Daniel Hernandez. For Hernandez' part, I decided that the RSL on 4/25 was the the closest to Seattle's style and strength. The Colorado match is out for obvious reasons, and I think RSL at home is a better comparable than the off-form Galaxy in LA. However, in this inherently small sample size, I have to note that only 4 players started both matches at the same position.

All that said, Marcelin completed 40 of 49 passes to Daniel's 31 of 43. However. you must note that DH's incompletions were much further up-field, and Marcelin had a couple passes picked off closer to the Dallas goal than DH's worst ones. In part this is due to Hernandez' passing being more offense-minded, and his working further up the pitch, even beyond the set pieces. Such passes are at very different place on the risk-reward scale than most of Marcelin's attempts. 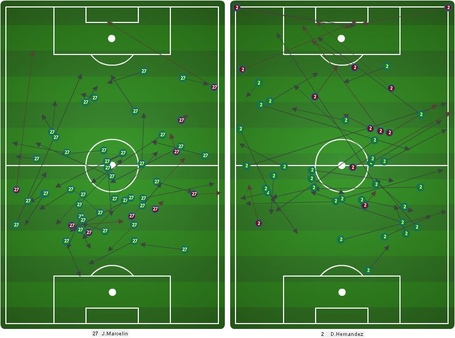 In comparing heat maps, you can clearly see that both covered a lot of ground, Marcelin (heat index of 94 vs DH's 88) ran just a little more overall, but the main difference was DH's movements were more vertical, while Marcelin's were mostly lateral. Naturally, Marcelin made more defensive plays since he stayed in the defensive half more often. The range of his defensive plays was impressive as well. Hernandez was getting into the attack more often and wasn't called on to cover ground laterally as Marcelin did, so his defensive stats were less voluminous, and more central. 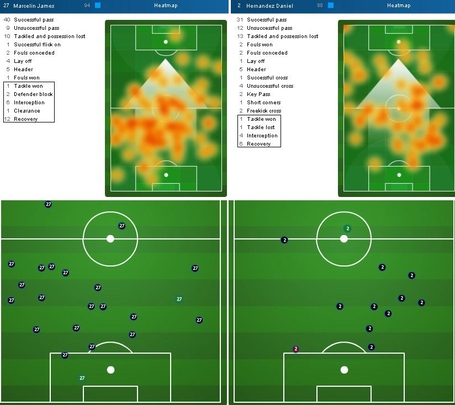 Both of these defensive midfielders had their strengths in these matches. While the raw numbers say that Marcelin did "more," what we really have here are two players with different skill sets, leaving Hyndman with interesting tactical options. Also, we can say with confidence that Kreis was able to prepare for Hernandez better than Sigi could for Marcelin.

While solid on Wednesday, I don't think Marcelin did enough supplant DH in the XI, but he surely gave his coach, and the fans, food for thought which is a fantastic achievement for someone signed off waivers 5 days earlier.

I think we all know the book on Fabian Castillo by now, at least at this point in his development. He's one of the most electrifying players in the league on the ball, but the final decisions must get better. As Scott Sealy said post game, as a forward, playing with him is difficult because you don't know if he is going to pass, cross, shoot or what he's going to do. The unpredictability that makes him a dangerous player can also be his downfall because it is tough for anyone else to play with him.

The problem, like I said, is the end result. From those 8 successful dribbles, only one shot into the side netting early in the first half and one cross were gleaned from those 8 good plays. I will say that something that doesn't really show up in the OPTA stats is the quick burst that Castillo has, evident on the cross for the Sealy chance late in the first half.

Rookie Matt Hedges matched up against Eddie Johnson with regularity on Wednesday, and Seattle tried to exploit that matchup in the air. It didn't work. Below you'll see all headers in the area that Hedges was generally responsible for. FC Dallas won 13 headers (on the left) in that region, and 10 of them were from Hedges, the same number as all Sounders combined. Those 13 headed passes were almost entirely sent back toward the offensive zone, and 7 of them (the green circles) connected with teammates. Of the Sounders 10 headers won, only 3 (also in green) were received by their teammates, none of which was directed toward dangerous positions.

Even more telling is the time-map, which shows that after testing Hedges was a Seattle focus in the first half, Sigi Schmid realized the kid was up to the challenge and must have ordered his guys to back off the tactic at halftime. Good adjustment from Seattle, and excellent work by Dallas' first round draft pick.

All of these trends existed on the other side of the defensive third as well, but not in the volume of Hedges' area. 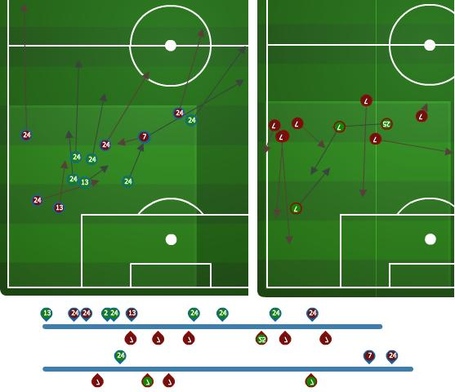 Is it because he didn't have to compensate for Daniel Hernandez? Is it because Osvaldo Alonso didn't play? Whatever it was, Andrew Jacobson had a much bigger impact on Wednesday's game than he has for awhile and it shows in his passing chart. I've included AJ's last 3 90 minute performances(besides Colorado) and you can really see just how much better things were last night, it was almost like there was some semblance of an attacking central midfielder! (click on the graphic to make it bigger) 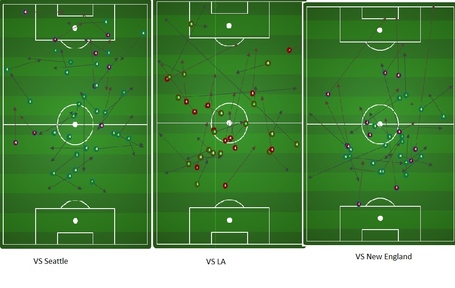