Jay Heaps has gotten his club to get through the tough growing pains early on this season and has surprised a few with two straight wins, including a massive win at LA last weekend.

The Revs are getting results out of some of their newcomers like striker Sear Sene and rookie Kelyn Rowe. But the bigger change may be due to the fact that Designated Player Shalrie Joseph finally has a good partner again in the middle of the midfield in Clyde Simms.

New England is coming into this game hungry and ready to prove themselves, which makes them a very dangerous team.

1. Smart on set pieces. Over the last two games the Revs have done one thing well, find Sene and his big head to get a goal. The Frenchman looked good getting the early game-winner against Portland in Week 3 and was able to hulk his way over the Galaxy defense. Dallas must be smart in the defensive third to not allow the wing play of Rowe and Nguyen to send in balls into the middle to Sene. Also locking down Joseph in the midfield will be key as he is excellent at opening up the attack for the Revolution.

2. Pressuring the young defense. While the last two games have been a big improvement out of AJ Soares, Stephen McCarthy and the rest of the lot, New England is still fairly young in the back. Not only are the two center backs young but the group itself is still coming together. German international Flo Lechner has looked solid in his first couple outings at right back but he also hasn't faced a Brek Shea type player so far this season. Keeping the pressuring up on this group from the flanks and with some speed down the middle (yes I'm talking Fabian Castillo again in a 4-4-2 as a striker!) will hurt the Revs. Just look at what Kansas City was able to do against the Revs, sure it was a 10-man group but the speed killed in that one.

3. What will Lee Nguyen bring to his homecoming? Never would have thought that Lee Nguyen would be making his homecoming as a member of the New England Revolution. The McKinney product has looked well with the Revs so far this season. He's already becoming a fan favorite in Boston and from what I saw out of him against LA last weekend, the kid is doing well to make a name for himself. He helped set up a couple of good chances, including one goal. You have to think he will be on an emotional high for this game having family and friends in the crowd.

As always, New England runs around this guy. While Sene has looked good and Rowe has been a solid rookie thus far, it is Joseph that this team relies heavily on for everything. 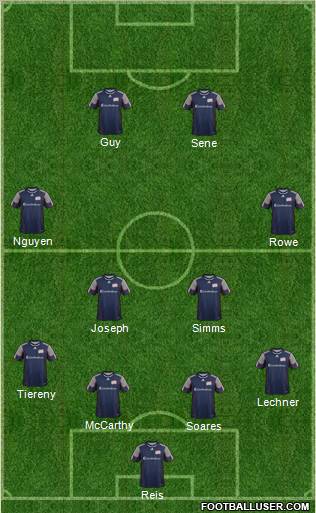 Notes: Most of the same from a week ago for the Revs. No Benny Feilhaber as he is out for this one. One possible change could be Jose Moreno up top with Saer Sene but its hard to tell when his debut will actually come for the Revs.

It is easy to say, this one is a must win for FC Dallas. No Jair Benitez or Daniel Hernandez make it interesting defensively for Schellas Hyndman but it shouldn't be too big of a deal. A couple changes, maybe a formation shift and presto! Dallas as to be up for this one as New England is certainly more hungry and ready to prove themselves than Dallas has shown in the last few weeks.

With this game and the next against Montreal ahead for Dallas, six points is an absolute must. No doubt about it.