Share All sharing options for: Time For A 4-4-2 Switch?

Yes I love bringing this up each season. You may recall the debate between Daniel and I last season over the 4-4-2, in the end the usual 4-1-4-1 won out and we've seen it so far this season.

We know the 4-1-4-1 is based mostly on the group of players that FC Dallas has on the roster, particularly with midfielder David Ferreira. While he's been injured Ricardo Villar has filed in pretty well in the main role above the midfield.

But going into the game with the New England Revolution, FC Dallas manager Schellas Hyndman has an interesting situation in front of him with the suspension of Daniel Hernandez.

Obviously doing this switch on a short week seems unlikely but given how closely Hyndman likes to guard his formations and lineups before kickoff, it wouldn't be totally shocking either.

Hyndman now has one less midfielder to think about and should Fabian Castillo return to action this week, a switch to the 4-4-2 seems like a wise move to shake things up to get this club out of their early season rut. While formation changes don't always do the trick, I think mixing things up in the midfield is exactly what this bunch needs for a game or even two.

It is a fairly simple proposition for Hyndman and one that could spark the offense with Castillo up top with Blas Perez. See what I mean here: 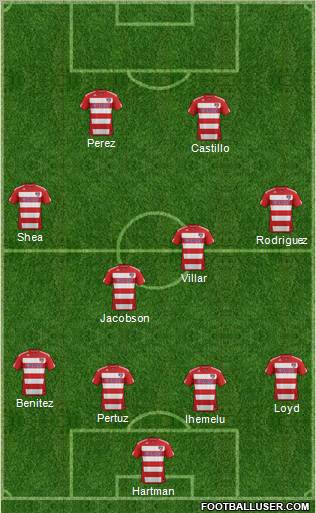 Now Hyndman could go with a flat four in the midfield or go with a diamond. Either way you spin it Jacobson will likely be shifted slightly below Villar in the center of the park, which is why I drew it up this way.

(* Just another note, Hernan Pertuz and George John seem to still be going head-to-head for the center back spot with Ugo Ihemelu, for this game I'm sticking with Pertuz)

Gaining Castillo back not only adds speed but it adds a ton of skill up top. He and Perez got a little bit of time together in the preseason and looked good in the process. We could easily see Brek Shea up top with Perez as well but the Castillo move makes more sense as it will allow Perez to do what he does best, holding the ball and distributing it in the run of play while allowing Castillo to run freely.

I like the idea of Carlos Rodriquez on the right wing with Shea on the left too. We've already seen this season how good Rodriguez can be on the right wing and he and Jair Benitez and Zach Loyd work well with one another on the flanks.

Thursday's match with New England will be a telling one for Hyndman and FC Dallas. Who he goes in to replace Hernandez with in the midfield will be as equally telling as what formation he puts out on the field. Should Hyndman stick with the usual formation we could see someone like Bobby Warshaw get a start in the place of Hernandez. We've always said he is the natural replacement for Hernandez in the future so maybe it is time for him to show what he is made of here.

This is a game that Dallas absolutely has to make a response with after two straight losses. Getting teams like New England and after that the Montreal Impact at home mean six points is the only answer fans are looking for out of these next two games (we'll have a more in depth look at the games ahead by the way coming up soon).

So what do you say? Do you want to see a big change Thursday night with a new formation or would you rather see the usual 4-1-4-1?