FC Dallas hits the road yet again for the third game in eight days. Schellas Hyndman and his crew head to the Home Depot Center to play the Los Angeles Galaxy.

The Galaxy got off to a slow start to their 2012 campaign by losing three of their first four games. But in their last two games, Bruce Arena's group seem to have gotten back on track with some of their bigger names scoring goals and their defense finally making key stops.

Dallas is searching for their first road win and even first road point of the year. It won't be easy but there are ways to get by the Galaxy and all of their stars.

1. Beating them with speed. One thing LA has proven this season and even in the last two or three is that if you have good speed up front or on the wings, you stand a decent chance at getting some points against them no matter where the game is being played. LA knows Dallas is dangerous, with guys like Brek Shea, Fabian Castillo and now Jackson Goncavles, Dallas has the speed up front on and the wings that present a stiff challenge to the back line of LA. Even when Omar Gonzalez was healthy, they still had issues with speedy clubs.

Dallas will want to make sure they get the ball wide with Shea and Jackson (or Castillo if he is on the wings too), and force the midfield back more than they'd like to be to defend. Also, involving Blas Perez early and often enough to put pressure on a center back duo of Junior David Lopes and A.J. DeLaGarza will be key. Those two are good together but aren't nearly on the same level that DeLaGarza and Gonzalez were a year ago.

2. How can Dallas defend that attack? The big names are there, Edson Buddle, Robbie Keane, David Beckham, Juninho, and Landon Donovan. It is all there for LA. But one thing is certain, they haven't totally gotten on the same page as one another here this season. That is good and bad for Dallas as the last two games this group is begun to gel nicely. Juninho is adding to the attack and Donovan is finally scoring. Keane also leads the way with three goals and you just know Buddle is due to break through here and add to his lone goal.

Ugo Ihemelu and George John will have their work cut out for them in the middle, as will Daniel Hernandez and Bobby Warshaw. The key will be on the wings with Zach Loyd and Jair Benitez. Both had a solid game against Real Salt Lake on Wednesday but both will have to be on their best this weekend. With Donovan coming down the right side against Benitez, it will be key for him to have a level head.

3.The Beckham effect. This will be an interesting match for Beckham and his service. Dallas has to ensure that his free kicks are limited and that he doesn't get a ton of extra touches on the ball in the open field. When he has that extra two or three seconds he is very dangerous, not to mention his has a couple of big time scorers to get on the end of his crosses.

David Junior Lopes. This has been a key spot for LA all season long. Without Gonzalez in the center of the defense it has been a center back by committee situation for LA. Rookie Tommy Meyer had a run at it and so did veteran Andrew Boyens. LA went out and traded for Junior Lopes to help add size and some physical play to the center back position. So far it has worked. 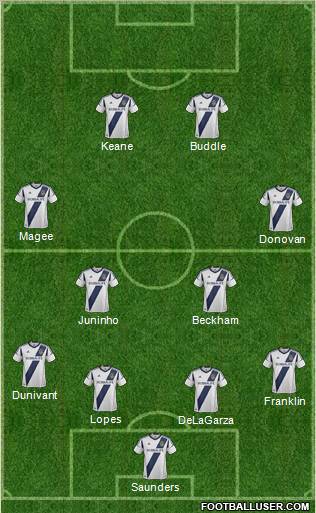 This is pretty much the same group that went out in Colorado last weekend. I don't imagine a ton of change from last week to this week given the fact that they had a full week of training.

Getting a point is really want matters in this one for Dallas. Just getting off the mark on the road is all this club really needs to feel confident about themselves here. People are doubting them already with all the injuries in the midfield but one thing we've seen out of this group is their willingness to never quit.

This is a gut-check game for Dallas. If they play their cards right, a point is there for the taking.