Nothing like a midweek clash against a conference rival to get the week started huh? Real Salt Lake comes to town tonight to face FC Dallas in a big game for both sides.

Each club is coming off a road loss last weekend and for RSL, they are losers of two straight, a rarity under manager Jason Kreis.

Dallas found out yesterday that they will be without forward Blas Perez while Salt Lake already knew going into this match that they'd be down two guys as well as Jamison Olave and Fabian Espindola are both suspended for this contest.

Read on for more thoughts, roster questions and more for RSL

1. Who does RSL turn to without Espindola and Olave? It's fairly simple for Kries. In the back he'll likely go with third-year defender Chris Schuler. In my book Schuler is a guy that could start for pretty much any team in the league at this point. He's a big defender, with decent size and knows his way around MLS by now. He may be prone to some bad passes from the back but overall his defending continues to improve as he sits behind two of the league's best in Nat Borchers and Olave.

Up top there is little doubt in my mind that Paulo Jr. will get the nod in place of Espindola. Paulo Jr.

2. Beckerman against Guarda. This matchup really isn't a good one for FC Dallas. No offense to Bruno Guarda but this is a mismatch in the biggest way. Kyle Beckerman, love or hate him, is one of the league's best center midfielders. So far this season he's gobbled up a couple goals and done well in tight spaces to lead this club to some wins. Guarda has to play smart against him and not give up silly passes in the middle of the park. In other words FCD needs the 30 minutes or so out of him that we saw against Montreal (a midfield with half the quality that RSL possesses) and not the full game that he put in against Vancouver.

3. Does the unbeaten record at home mean anything at this point? It is a yes and no answer for me. In the truest sense it should because it is something that Dallas has over Salt Lake when it comes to playing in Texas but on the flip side the two teams drew 0-0 in the lone regular season match here last season. So RSL knows they are getting closer to three points in Frisco.

Dallas cannot look at that figure and just expect three points or even a draw. Form is a big part of this game and right now neither team truly have it. RSL has lost two straight and has yet to lose three straight under Kreis. In other words, this group gets it together in that third game some how. Expect a massive push for three points tonight out of RSL.

Alvaro Saborio. The Costa Rican has played pretty well this season but at times has been lost. He'll have to carry the club offensively tonight with his strike partner Espindola on the sideline with the suspension. 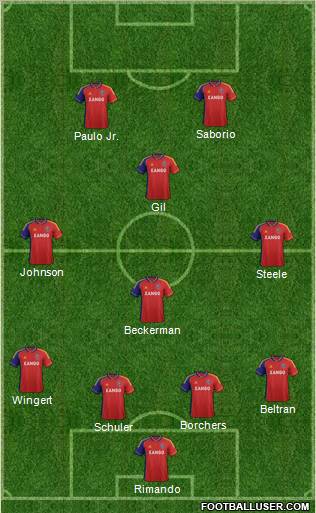 Pretty much the same group that went out in San Jose, minus Olave and Espindola. The big question is Javier Morales who is listed as questionable on the injury report. Should he be able to go, take Gil out and place him in there. Other than that this is a fairly typical lineup for Kreis and RSL.

Both teams need three points. It is as simple as that. RSL may have a few more wins in the standings but they also have three losses, the same as FC Dallas. We know about the records in Dallas (and Texas for that matter) for RSL and yes that is a factor. Both teams are missing key elements to the attack and the defensive edge should go to Dallas in this one.

What this one comes down to is playing a simple and direct game for Dallas. Schellas Hyndman shouldn't try to do anything wild and crazy with his lineup and I doubt he will tonight. The group needs to find ways to have Shea and Castillo involved as early and as often as possible here. That's the way to get three points. If someone else can step up offensively, then that is even better.

In the end points matter and Dallas cannot afford to drop points at home given how tough and tight the Western Conference is this season.