Share All sharing options for: Scratching The Chalkboard: FC Dallas vs Vancouver Whitecaps

Scratching the chalkboard is a new feature I'm starting here where we look at a few different interesting notes from the OPTA chalkboard following the game. If you're not familiar, the OPTA stats are advanced numbers that track every pass, shot, etc...and you can find them by going to the MLS Matchcenter for the particular game and clicking on chalkboard. Sometimes there will be a lot of interesting stuff and sometimes there won't.

Schellas told us on Wednesday that he needs Bruno to be a more attacking player and then yesterday talking to Todd Date said that Bruno was not the difference maker he needs him to be in the attack on Saturday night in Vancouver, playing too tentative in the attacking role he was in. The chalkboard certainly backs this up if we look at his passes. 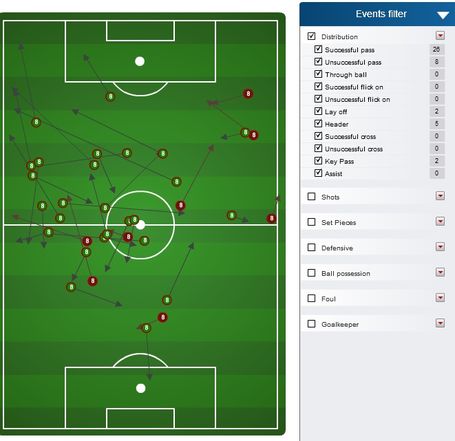 This chart shows completed and uncompleted passes and while his completed passes to turnover ratio is pretty good, you can see that almost every single pass is out to the wings and away from goal. Bobby Warshaw and Daniel Hernandez are typically the guys to play the safe game while Guarda was given the responsibility of creating something in the attack and far too many times he resorted to predictably passing out to the wings rather than trying the unpredictable. While it is very true that you don't want to turn the ball over, you've got to switch up the game sometimes to keep the defense guessing and if there's one word you could use to describe his game on Saturday, I think it would be "Predictable."

Dallas did a very good job of limiting the Vancouver possession and limiting the amount of passes the Whitecaps stringed together. The 249 successful passes that Vancouver had on Saturday was the second least of any FC Dallas opponent this season, only Portland had fewer passes against Dallas.

Hernandez back to old form

While his free kick service leaves something to be desired, Daniel Hernandez is quietly putting together a pretty impressive season so far. He says in the radio interview I posted earlier that he feels completely healthy right now and it's showing in his play. A big part of the reason Vancouver was unable to string passes together and Dallas was able to hold possession was Hernandez's calmness in the middle. He was also the main instigator of passes forward. Compare Bruno Guarda's pass chart to DH's...varied play, and simply putting his stamp on the game. 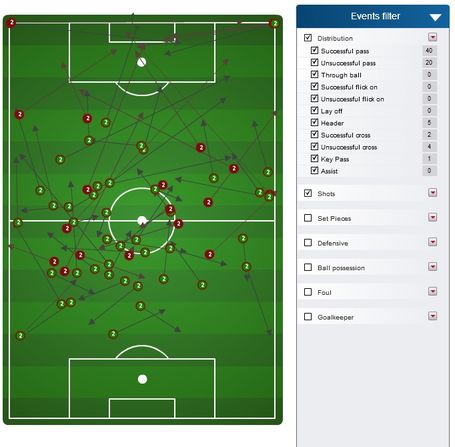 Daniel asked me to pop in and add anything interesting that I saw in the Chalkboard. First, I have to confess that I didn't see the game. My family was incredibly busy (in a good way) over the weekend, and I didn't get a chance to catch up. After hearing some of the reports, I'm relieved that if I had to miss a game this was the one. That said, I found one interesting trend, and I'd like to hear if the Chalkboard contradicts anyone's direct observations of the match here.

Seitz had the penalty area to himself

Check out the four heat maps of the Dallas' backline:

Carlos Rodriguez wandered into the box a bit, George John did so a little less, Ugo hardly at all, and Loyd seemingly spent the entire match bombing up and down the right side. Pair this with the fact the Letoux, Salgado, Harris, and Hassli weren't in the box either, and you see that the backline held up their end quite well. In particular, look at LeToux's impression of a right-sided defensive midfielder: 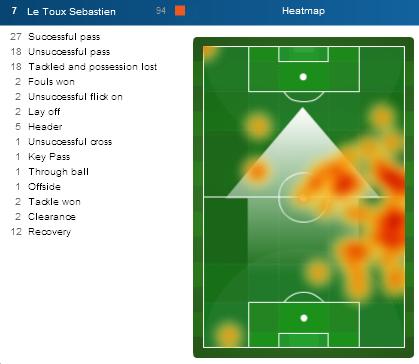 It seems that Rennie assigned Sebastien to primarily help out on Shea and Rodriguez along that side, and he never got forward. Obviously, Vancouver bunkered hard with the lead, but the defense did an admirable job of preventing them from getting anywhere near dangerous positions most of the time.