FC Dallas hits the road for one of their longer road trips of the season this weekend as they take on the Vancouver Whitecaps at BC Place tomorrow evening.

FCD is riding a two-game winning streak while the Caps are losers of two in-a-row. The first four games of the season Martin Rennie's club was off to a hot start with a strong defense not giving up a single goal. But the last two games haven't been the case as the club has given up six goals.

A third straight win for Dallas would put them into a good position going into the clash with Real Salt Lake next week, while the Caps are just hoping to get their high powered offense going for a change here this season.

1. Camilo, Le Toux, Hassli, oh my. It really is only a matter of time before this trio really gets going here. There is just too much talent between them to not get going. Camilo Sanvezzo is deadly from all over the field and Dallas will want to stick an extra body on him at times to keep him from getting extra touches on the ball. Eric Hassli has no goals to his name yet this season but he does get his fair amount of shots on target and he does lead the team in assists. He's a big body that will give Ugo Ihemelu and George John trouble if they aren't careful. And as for Sebastien Le Toux, he is always finding himself in the right spot to score a goal, with three to his name this season, he is always looking to score.

2. Will an improved defense cause FCD fits? It may be hard to get an accurate read on this club's defense. Between the likes of Jay DeMerit, Martin Bonjour, Jordan Harvey, Alain Rochat, and Y.P Lee, the Whitecaps have plenty of talent in the back to go around. The first four games were impressive as they didn't allow a goal, but at the same time it was against teams like Chivas, Philadelphia, DC, and Montreal. In the last two games they were against quality teams with speed as San Jose and Sporting KC really took them to the woodshed scoring three goals apiece on this group.

So what does that mean for FCD? Go at them with speed. The concept is simple but one that could yield a good return for Schellas Hyndman's group. Blas Perez already has shown the natural ability to hold the ball well up front and spread it around on the wings. Having the likes of Brek Shea, Fabian Castillo and other quick feet on the team, FCD stands a good shot at this game if they control the possession and use the pace of their wing play to go at this group.

3. Form factor. Its a troubling thing if you are a Whitecaps fan. The six games this season have gone two wins, then two scoreless draws, followed by two 3-1 losses. Not exactly where you want to be at the moment. Dallas has a two game winning streak going into this game and they must use that momentum to get by Vancouver here. Hyndman joked the club is being called Schellas Hyndman and the Heartbrakers these days, time to prove that nickname on the road. If Dallas wants any sort of success this season they must do it away from home here.

Le Toux. For the most part the most consistent player for them this season has been Le Toux. No shocker there considering how well he's played over the last three seasons in MLS. 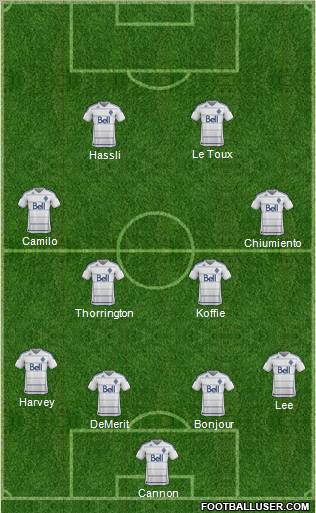 There are times when Rennie's lineup resembles a 4-4-2 like this but typically its more of a 4-3-3 when Camilo is in there. I'd expect it to go that around with Hassli sitting between Camilo on the left and Le Toux on the right. I'm not 100% on the midfield duo behind them though with John Thorrington and Gershon Koffie starting on Wednesday. You could easily see someone else in there in place of one of those guys.

This is a game Dallas can win, there is no doubt in my mind about that. If Hyndman can put out a team that plays with speed, possesses the ball well enough, and doesn't give up silly mistakes in the midfield then three points should be very doable.

That said, this Whitecaps team is tough, very tough. They have a lot to prove and a lot to get better on here. They need three points as badly as Dallas does here and this one will not be easy. In a way it is really only a matter of time before their offense really comes alive here, and Dallas fans just need to hope it doesn't happen against them.