For the second straight week, FC Dallas hosts an Eastern Conference club. This will be FCD's first crack at the newest MLS club, the Montreal Impact.

Dallas is off their second win of the season, thanks to a late Ugo Ihemelu goal against New England last Thursday. A win for Dallas could push them to as high as third in the Western Conference while giving them the six points that everyone was expecting them to get out of this two-game home stand.

1. They play like their manager use to. Yes the Impact are a measly 1-4-1 on the season with both decent results coming at home. But the one thing that is clear about this squad is they play just like Marsch use to when he was with the Chicago Fire and Chivas USA. Gritty, a handful, and just down right tough. The talent is decent with this club as they have a few quality players like keeper Donovan Ricketts, second year full back Zarek Valentine, veterans Justin Mapp and Davy Arnaud and a couple of streaky forwards in Sanna Nyassi and Justin Braun. Outside of that they do have a few internationals with decent experience but they are still finding their way in MLS.

2. Frustrating their offense. Take one look at this Impact squad and you can tell they have quality on offense. Between Mapp, Arnuad, Nyassi, 2012 SuperDraft pick Andrew Wenger and Bernardo Corradi, the talent is there to score goals. So far they haven't had one guy stand up and take the lead in scoring. Nyassi seems to be the guy that wants to be the top scorer as he leads the club in shots and shots on goal. But more importantly for the back four of FC Dallas, he also leads the team in yellow cards. Frustrate him early and he won't be a factor.

3. Can Montreal dictate the pace and energy of the game? One thing the Impact did a good job of last Saturday in their win over Toronto was controlling the pace and tempo of the game. Their midfield duo of Collen Warner and Felipe Martins did a decent enough job at setting the tone of the match early. What Dallas needs to do is match that tempo and use the pace of the wings to control the game. We saw last week against New England that using Zach Loyd and Brek Shea on the same sideline really worked while Carlos Rodriguez and Hernan Pertuz did a solid job on the right side. Obviously we'll have to wait and see if Jair Benitez has worked his way back into the lineup this week but the wing play is where Dallas needs to control this game.

Keep an eye on Corradi. He's a guy that can finish well when given the chances to. If Nyassi is able to frustrate Ihemelu and company in the back, Corradi could be left open to do the damage. 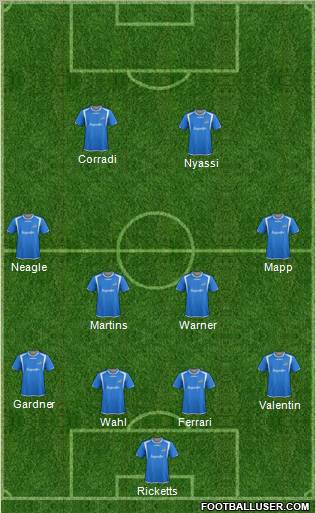 Montreal may be one of the harder teams to figure out a starting lineup for right now. Marsch has used a few different combinations so far this season. I think the back four seems pretty straight forward and I'd expect Felipe Martins and Collen Warner to be back in the center of the midfield again this weekend. For the most part this lineup resembles their one from their win last week so I'd imagine it will be somewhat close to this.

Again, this is a game FC Dallas has to win. You are at home against an expansion team, there should be no doubt about it for Schellas Hyndman and company. The lineup may be jiggled a little more this week with the loss of Ricardo Villar but for the most part I think just Daniel Hernandez returns and Andrew Jacobson stays in the middle in the 4-4-2 set up. Dallas matches up well with this Montreal team that is still finding their identity in this league. It won't be an easy game but Dallas should get the three points.