Where Does Jackson Fit Into the Lineup?

Share All sharing options for: Where Does Jackson Fit Into the Lineup?

The news of Jackson returning to FC Dallas is pretty much a formality at this point. From all indications, the enigmatic Brazilian midfielder should be wearing the red and white of FC Dallas by the end of the month, provided there are no major visa snags or other complications that can come up with a player moves internationally. So now the question becomes, where does Jackson fit back into the lineup?

There's two different schools of thought on this, in my opinion. Option #1 is Jackson slots in perfectly at the right midfield position in the 4-4-2 that Dallas has moved into. Jackson was at his best for FC Dallas when playing in that right midfield position with his smart runs and good 1v1 attacking play. He tends to get back on defense acceptably well and is a major threat to shoot from outside the box as well.

With Fabian Castillo pushed up to forward, FC Dallas has been forced to play Panamanian Carlos Rodriguez at the right midfield position which is not only the opposite side to which he is used to playing, but also much farther up the field than he has likely ever played before.

Bring in Jackson at the right mid position would be a clear upgrade and give FC Dallas the option of bringing a talent like Carlos Rodriguez, who can fill in at four different positions, in off the bench.

Option #2 after the jump

What a luxury it would be for FC Dallas to know that you have a guy like Jackson ready to go if there's an injury at any of the forward or wing positions. He could even fill in at a central midfield position if he decided to play with some emotional intelligence.

Whatever FCD decides to do, the re-addition of Jackson to the squad will add a ton of quality to the team and some much needed depth. There's not really anyone else on FC Dallas that who can play right midfield and is capable of a heat map like this one he had vs Columbus on July 4 last season. 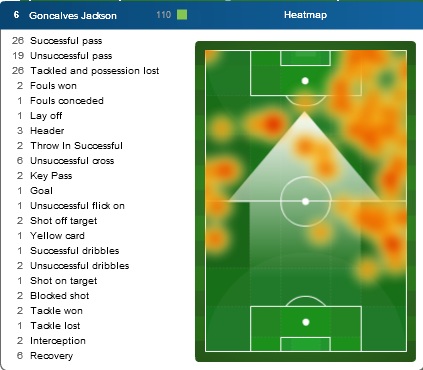