Behind Enemy Lines is back for another season. Its hard to believe that the offseason is over already. After last night's Champions League action I am probably like most of you, ready for some MLS action to get going here.

The first game of the season for FC Dallas is a big one, against the New York Red Bulls, a rematch of last season's Wild Card playoff round. As many of you recall, the Red Bulls came into Frisco and downed FCD 2-0 thanks to Thierry Henry and Luke Rodgers.

Dallas was fairly beaten up for that game and were just gassed by the end of it.

Flash forward to this week and the tables have turned a bit going into the First Kick game.

1. Who will fill in for Rafa Marquez? Marquez is suspend for this one thanks to his involvement in last year's melee after the playoff game with the Los Angeles Galaxy. The Mexican Designated Player was expected to move into the midfield this season for the Red Bulls instead of sitting in the center of the defense. Now New York boss Hans Backe will have to decide between guys like former FCD midfielder Dax McCarty or Medhi Ballouchy. I throw those two names out because I expect Teemu Tanio to start in the defensive side of the midfield in Marquez' place.

2. No Ream, no Conde. The New York center back pairing is a bit of a mystery in some sense. Wilman Conde was brought in to replace Tim Ream (who landed with Bolton this winter), but Conde picked up an injury last week in Arizona. I wouldn't have counted Conde as a major factor even had he not picked up the injury though. He hadn't played in a competitive match in nearly a year. Backe will likely turn to Stephen Keel in the back to replace Conde and he'll partner with newcomer Markus Holgersson.

3. Ferreira or no Ferreira? By the looks of things, FCD fans will not see the return of David Ferreira this weekend. The initial injury report supplied by the team suggests he will be out for this game on Sunday. An updated report should land sometime tomorrow afternoon but I wouldn't have high hopes of seeing DF10 on Sunday. What that means for Schellas Hyndman and crew is one of two things: 1) remain in the 4-1-4-1 with Ricardo Villar filling in or 2) go to a 4-4-2 and have either Brek Shea or Fabian Castillo play up top with Blas Perez. My vote is for the normal 4-1-4-1 for this game, even if it means the distribution pressure falls on Villar. I just feel that lineup will work better than a 4-4-2 against New York.

Joel Lindpere - the left-winger has been easily the most consistent player for New York over the last two seasons. Lock him down and you cut off some key distribution to Henry and Cooper from the flanks. 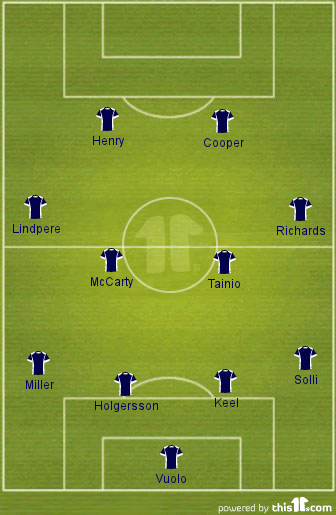 Notes: Only two big questions in my mind are who starts in goal and who starts for Marquez. I'm going with McCarty in the midfield and Vuolo in goal. We could see Ryan Meara in goal but he did break his nose last week, that is something to keep an eye out for if he does start because he'll be wearing a protective mask.

With no Marquez, potentially no Luke Rodgers (visa issues) and a suspect defense going into the start of the season, Dallas should be able to get no worse than a draw out of this game. New York is a tough team and their starters are very talented but we know their bench is very thin. If Dallas can get them into some card trouble early and find a way to keep Cooper and Henry at bay, I'd expect three points from this game.

Naturally the bigger questions surround who will start in defense for Dallas. Will it be George John or Hernan Pertuz? My gut tells me it could be John but I wouldn't be surprised with Pertuz starting either. Pertuz would be a gamble simply based on his lack of MLS experience. He looked solid in the preseason but this is the real deal and John has more to offer even if he didn't spend the preseason with the team.

With a potential sellout on Sunday, the game on NBC and all the new stadium stuff going on this one will be a fun one to experience in person or even at home on the couch. Let's all just hope that Dallas gets off to a good start to the season for a change.