I've got a few different thoughts on tonight's match, but the primary focus will be on the wing play

Wings non-existant DC United scored some amazing, high quality goals tonight and deserve a ton of credit for it, but tracing what brought about those chances has led me to find that the FCD wing play was the primary culprit. I can appreciate that Schellas Hyndman wants to give Brek as free a role as possible, but right now his wingers are being given far too much freedom. Both Brek and Carlos were all over the field and not simply sticking to their sides. See the Opta heat maps below. 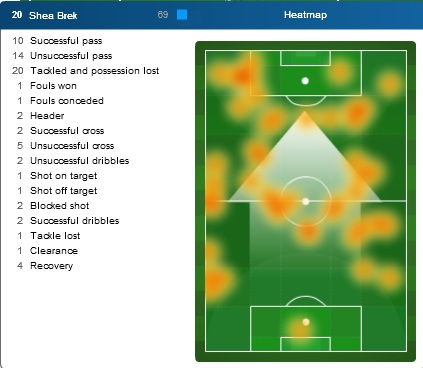 Notice in the Brek Shea heat map how he is all over the pitch and not focusing on one side. It ends up hurting the FC Dallas shape and allows a whole bunch of space on the wings to Cruz and DeLeon. Let's look at Carlos Rodriguez's heat map: 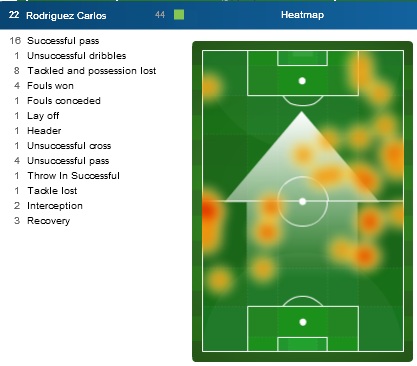 The exact same thing. All over the pitch and not sticking to his side. Good passing numbers from Rodriguez, but if you look almost all the passes were backwards and nothing going forward. Now on to the DC United winger heat maps. 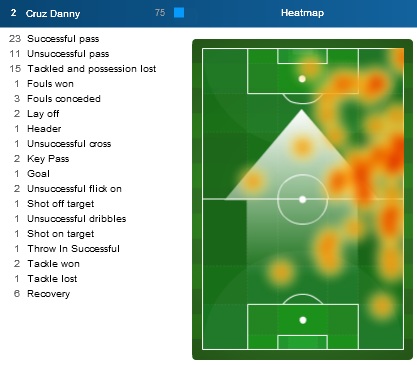 Cruz wasn't dominant, but very effective on the right side and notice how he basically never ventures to the left side of the pitch. You'll see the same thing from Nick DeLeon 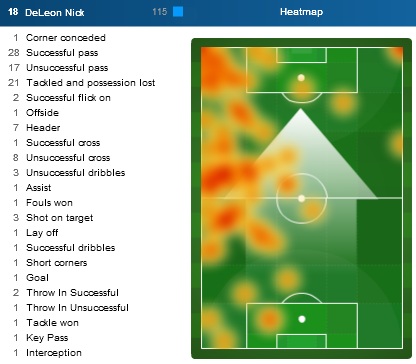 Simply dominant on the left side. The differences in the wings were quite obvious tonight and you can see that from the heat maps.

Other observations from Friday's game

Second half is becoming a serious problem. FC Dallas has been outplayed in basically every second half of their four games and hasn't even come close to threatening the goal late in games. Is it a fitness issue? Is it a depth issue? Probably a little bit of both, but tonight was yet another unacceptable second half.

Defending as a unit While Jair Benitez will likely get a bunch of the blame tonight, and deservedly so(falling asleep on the 3rd goal is unacceptable), the problem I saw from the four goals was defending as a unit and poor communication. Looking at the Opta chalkboard and watching the highlights again, it's tough to pinpoint one player. The passing was not terrible from any of them(and very good from the center backs), but it's clear they're just not communicating well and defending as a unit.

That includes Daniel Hernandez as well and you can see leading up to each goal, one guy is not stepping quick enough or just bizarre things are happening like Jair Benitez defending on the right side in the fourth goal. Are they missing George John?

Hindsight is 20-20 but starting Brek Shea looked to be the wrong decision. The winger was really poor tonight and not up to the standard that he has set for himself. Opta stats say Brek had 10 successful passes and 14 unsuccessful passes which isn't good enough. Perhaps some rest and two games at home will be what cures him, but something needs to get his season going. It's been awhile since we've seen Brek Shea at his best and I think I know why(but that will have to wait for another post).

And some quick hits....Maicon Santos, sure could've used some of that last year. Even just a little bit....Blas Perez is just so good at what he does. How many former Dallas "target forwards" would have never finished that chance he was given. 2 goals, 2 assists and a big hand in the other goal. What a great forward...I'm very interested to see how FCD does without Daniel Hernandez at defensive midfield. I'm having trouble pinpointing any one thing he's not doing that well, but he's not really passing the eye test right now. We'll find out on Thursday without him...and finally, the sky isn't falling. The next two games are probably the two easiest games of the season and there's a great chance for Dallas to get healthy and get some points on the board. When you get 1 point from 2 road games, you really need to win these next two home games.