The first road trip of the season for FC Dallas is a tough one. Heading into the Blue Hell of LIVESTRONG Sporting Park to face Sporting Kansas City won't be easy for Dallas. No Brek Shea, no Fabian Castillo, no Carlos Rodriguez and likely no David Ferreria. Ouch.

Time for some young guys to step up and earn their keep here for Schellas Hyndman. I'd imagine the lineup will resemble what we saw against Portland in the second half last week but I'll let Daniel go more into that later this weekend.

Sporting is off to a hot start - going 2-0-0 - and registering two shutouts to being the season.

1. Slowing down the attack. With the likes of Kei Kamara, C.J. Sapong and Graham Zusi, Sporting is fast. Really fast. But as we know Dallas is a fast club as well. It's probably better to say that these are two of the most athletic teams in all of MLS going at it on Sunday. But how does Dallas counter their speed? Simple, eliminate the passing lanes that Zusi and Bobby Convey have in the midfield and spread them out. Dallas does best in the attack when they spread teams out and play the possession game. That will be key against a team like Sporting.

2. Weak spots in the lineup. Sporting's defense is much improved over the last few months compared to the start of last season when they were leaky. Playing at home certainly helps a team like this out but they are still prone to mistakes in the back. Roger Espinoza is always likely to commit a silly foul, as is Aurelien Collins. Forcing Sporting to commit silly fouls around their penalty area is something Dallas can and should go for in this one. Same goes for up the field in the midfield. Zusi is prone to fouls, as is Convey. This team is talented but they do let their emotions get the best of them at times.

3. Youngsters called into action. While it is a pure guess, we should once again see Bryan Leyva in action this weekend for FC Dallas. If not Leyva, certainly Andrew Wiedeman will be called into action. With the depth being truly tested on the wings for Hyndman in this one, those two guys have to step up. It could however be possible that we see a shift to a 4-4-2 with Ricardo Villar playing on the wing and someone like Ruben Luna or newcomer Luis Peara getting a start up top with Blas Perez. While that may be highly unlikely it at least has to be discussed. Either formation however has to utilize the wings against Sporting. That can't be said enough.

Sapong. The kid is no joke folks. No sophomore slump for this guy as he's already raced out of the gate with two goals, one being a game-winner in DC. Ugo Ihemelu, George John or Hernan Pertuz have their work cut out for them with this guy. 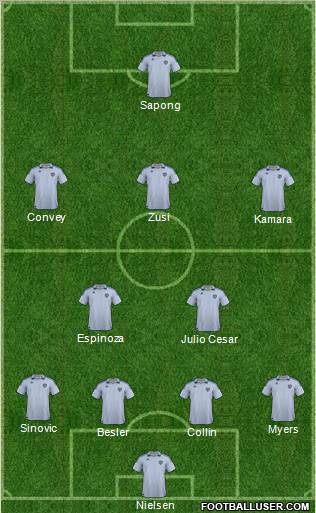 Notes: I don't expect too many changes for Sporting in this one from their 3-0 win over New England last week. It is a very attacking style lineup that will cause issues, I'll say that.

Without the main guys that I mentioned at the start of the article this one will certainly be tough for Dallas to win. Playing on the road is never easy but playing without three key starters on offense makes it even worse. Double the fact that Sporting is actually a really good team these days and we're bound to see a tough game on Sunday.

If Dallas can control the possession, spread out Sporting and limit the passing lanes in the midfield then they could squeeze a point out of this one. They know how to win in this building and win late in this building too.