Share All sharing options for: OptaHunt: The Ferreira Effect

Last season, David Ferreira played 502 minutes before his ankle was broken against the Vancouver Whitecaps. While he was playing, FC Dallas earned 0.8 points per game (excluding the game against Vancouver) scored 1.07 goals per 90 minutes, and allowed 1.61. Without him, those numbers shifted to 1.61 ppg (also excluding the first game vs the 'Caps), 1.26 for, and 1.06 against. That's the simple "statistical" analysis you might hear a few times this year from commentators. Surely the 2010 MVP didn’t have a negative influence on his side in 2011… right?

Opta Chalkboards gives us access to much more detailed and insightful statistics, which give us a more accurate and nuanced view of Ferreira’s contributions to the red stripes. We can evaluate FCD before and after the injury in their shooting, possession, passing, etc and the placement of every one of these actions. Such data will illustrate the effect El Torito had on the squad in the past, giving us a reasonable expectation for FC Dallas' play when he returns to health in the near future.

In other sports, Value Over Replacement Player (VORP) is a standard measure of a players worth, measuring their contributions relative to a hypothetical low-level player at their position. Last season, Ferreira’s injury created a natural small-scale case study for this valuation in MLS. The most logical pairing1 of pre-injury matches with a control group are games versus San Jose (Home 3/26/11, Away 10/22), Colorado (H 4/8, A 10/1), and Portland (A 4/17, H 6/25)2. Sizable differences exist between these sets of data that can teach us about El Torito’s impact. One of Ferreira’s more striking influences was in the location of shots on goal. My own attempt to display these shots visually was hideous, so I enlisted my graphic designer brother-in-law, to create an infographic using Opta Chalkboard data (click the image for a larger, crisper version): 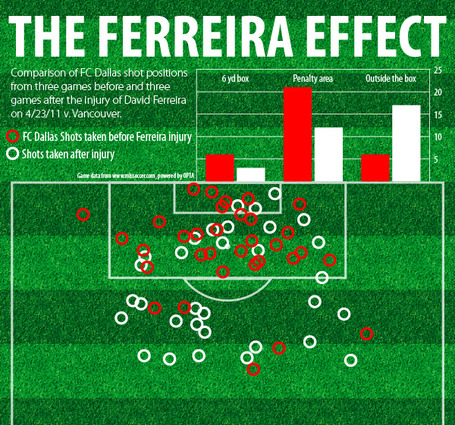 Read on for interpretation of this graphic and other data from these games:

The early season games between FC Dallas and San Jose, Colorado, and Portland are in red and the second meetings with those clubs are in white. For the purposes of this study, shot outcomes are secondary3, because when a distributor is largely dependent upon his strikers to score, it is best to judge him by the quality of the opportunities he provides, not their outcomes. Shot location is the important distinction here. Ferreira’s movement and vision clearly opened up the final third and got shooters markedly closer to the goal.

We should value passers who have a consistent ability to create shots inside the 18-yard box more…. At the same time, shot selection, in particular % of shots taken outside the 18-yard box should be a key indicator we watch at both the player and team level as a measure of shot quality. - Jaeson Rosenfeld, StatDNA

Rosenfeld's study states that, on average, 14% of shots inside the box are goals, while 3.2% of shots outside the penalty area find the back of the net. Logically, shots from the six yard box are likely to have an even higher chance of scoring and shots in front of goal should be easier than shots from odd angles, but I was unable to find an empirical study of those theories4. Even lumping < 6 yard shots with everything else in the box, Ferreira-led Dallas should have expected to score 3.972 goals, while the Ferreira-less hoops should have only scored 2.644. Shockingly, Dallas strikers actually outshot expectations, and more than doubled EV in our control (post-imjury) group.

Keep in mind, that includes 92 minutes played a man down against Chicago and Columbus. In our three game sample, he was even better, creating a scoring chance every 18 minutes.

Here are the some other stats that occurred often enough to create a substantial sample size with a substantial difference between the matches David Ferreira did and didn't play in:

Throw ins: Dallas’ opponents kicked the ball out of bounds just as often with or without Ferreira in the match, but the red stripes success % on the resultant throws was very different. Despite his stature, Ferreira had a definite effect on these plays, whether he threw it himself (6 successes, none unsuccessful), received it, or the threat of him attracted attention, allowing space for a teammate to receive the ball.

Dribbles: The Opta definition of this statistic is: "an attempt by a player to beat an opponent in possession of the ball." When an attacker beats his defender and retains possession it is a success, while a dispossessed attacker is marked as unsuccessful. As anyone who watched FC Dallas in 2010 can tell you, David Ferreira is very willing to attempt such dribbles, and quite capable of winning them (in our sample he attempted 9 and won 7). The differences in dribble attempts and success% go well beyond Ferreira’s direct contributions, though. His presence seems to spur some combination of confidence in his teammates, adjusted tactics from Hyndman or the opposing managers.

If you've read this far, thank you, but I don't want to abuse your attentions any further. Instead I have uploaded all stats pulled from sample matches and you are more than welcome to investigate the details further (please comment with your findings). I will say that the differences are close to universally favorable to the Ferreira-led squad. Seemingly unflattering swings are either likely independent (for the life of me I can't figure out why Ferreira-led FCD would intercept less passes), meaningless (no way layoffs are predictive of results), or have positive implication below the surface (offside calls equate with offensive aggression).

Though we can clearly see David Ferreira's impact empirically, there are still lingering questions about the impact we can expect this season. When will he be back? When he returns, will he ever be his old self mentally or physically? I leave you with a simple statistic that makes me hopeful for his durability. In 2009 and 2010 combined, Ferreira played 5391 minutes out of a possible 5400, all while being one of the most fouled players in MLS. We can reasonably hope that one reckless challenge didn't turn one of the league's most durable players brittle. If he can stay fit and in-form, his work setting up Fabian Castillo, Blas Perez, and Brek Shea should terrify the rest of MLS.

Footnotes that only stat geeks or my mother could find interesting. The rest of you have been warned:

1 - Ferreira played 5 full games against Chicago, San Jose, Columbus, Colorado, and Portland before his injury. Weighing those games against the other five matches would be ideal. Unfortunately, while Ferreira did play the full assortment of minutes for FCD right up to his injury, Brek Shea and Jackson earned red cards in the 55th and 33rd minutes against Chicago and Columbus, respectively. The data from those games was inconsistent with Ferreira’s other 3 matches, as you would expect when 92 out of 180 minutes were played a man down.

2 - Some might wonder why I chose to only calculate difference at the total team level and didn't compare Ferreira’s individual stats to those of Ricardo Villar, Daniel Cruz, and anyone else that played his position. I felt that though Villar, Cruz, etc. may have been playing in El Torito’s normal location last year, his role in the team was split up amongst all midfielders and strikers. After the 53rd minute in Vancouver, Brek Shea, Andrew Jacobsen, Marvin Chavez, Jackson, Villar, Cruz, etc. were all trying to create offense and finish chances in Ferreira's stead. Also, soccer is so fluid that players will always have impacts that don't show up on their own stat sheets, but trickle down to their teammates.

4 - If anyone knows of a study detailing strike rate across multiple locations on the ptch, please drop me a line @OptaHunt. I think a heat map of either actual strike rates or EV for shot locations would be a hugely useful tool.