Go Red. That is what the club is promoting for Saturday's game against the Portland Timbers. A good reason too since it will be St. Patty's day and the Timbers wear green and all.

Portland comes into FC Dallas Stadium on Saturday, hoping to carry the momentum of their season opening win over the Philadelphia Union. The Timbers only won two games on the road last season and their lone visit to Frisco wasn't a good one as Dallas dominated the game with a blowout win.

Read on for more thoughts, questions and potential lineups.

1. Is Kris Boyd the real deal? After seeing a little more out of him on Monday with some of you at the Big D Soccer Pub Night, I can say this about Boyd: he is big, physical and knows his way towards goal. Some may hate me for saying this but he is a more skilled and polished version of Kenny Cooper. His goal against the Union kind of defied the laws of physics in some ways. I watched that goal over and over again, it still is a crazy one to me.

I'd imagine we'll see a lot of Daniel Hernandez on Boyd come Saturday. The same was true with Hernandez on Thierry Henry last weekend. Playing him up front and avoiding the easy foul is key.

2. Speed on the wings is key. One way of getting through on the offensive side against the Timbers is through the wings. They have quality on their wings in players like Darlington Nagbe, Kalif Alhassan and their fullbacks (Lovel Palmer, Rodney Wallace) aren't too bad either. But beaten them with a ton of pace works.

When Dallas played at their best last Saturday it was with possession and speed on the wings. We should see a steady dose of Jair Benitez and Zach Loyd creeping up into the attack and if Fabian Castillo is fit, things should be very good on the wings for Dallas.

Portland likes to clog the middle of the field with Jack Jewsbury and Diego Chara. Eliminating the easy passes from Jewsbury is a major thing Hernandez and Andrew Jacobson will have to do.

3. Defensive issues. One thing Dallas will need to focus in on is the defense in the back for Portland. Rookie Andrew Jean-Baptiste looked good in his debut against Philadelphia but his first road game may be a tough thing to deal with. Blas Perez will need to be physical and controlling against Jean-Baptiste and force him into mistakes like he did against Markus Holgersson last weekend. Eric Brunner is the strong man in the middle for the Timbers but he can cough up his fair share of mistakes as well.

The same will go with the fullbacks, play them at speed and spread them out. In the two games last season, Dallas was most successful against Portland when they were able to spread them out and play at their pace.

Set pieces. This club is absolutely stellar at getting big bodies into the penalty box and hammering home balls off set pieces. Dallas has to remain smart in the defensive third of the field on Saturday. Thankfully last weekend both Ugo Ihemelu and Hernan Pertuz combined for zero fouls against the New York Red Bulls. More of that again on Saturday will be needed. 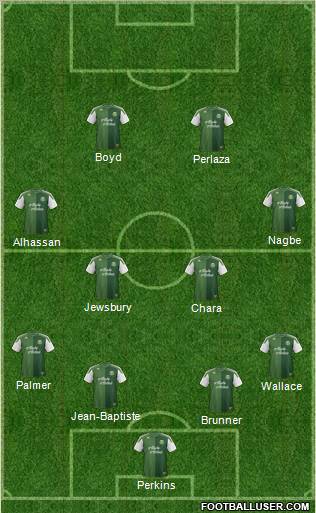 Notes: I changed up their lineup just a bit from their staring XI against the Union on Monday. I put in Darlington Nagbe in over former FCD midfielder Eric Alexander. Just a bit of a hunch that Nagbe slides into the line up as a starter this week after coming off the bench for EA.

This should be a fun game to watch on Saturday. Portland is a very solid team that can be very dangerous in the Western Conference. I think if Dallas plays to their strengths on the wings and up top that the middle of the field will be their's to control.

Playing smart will be key as the Timbers love to play big and physical.

I think getting out with a point is doable and three points isn't out of the question. We don't know how good this team will be this season away from JELD-WEN Field and I'm not willing to bet they'll be great on the road this early in the season.