In the first game of their week-long trip to Cancun, an FC Dallas team made up of mostly reserves and trialists beat Mexican second division side Inter Playa Del Carmen 1-0 thanks to a stoppage time winner from Matt Hedges.

First the lineups and a couple of notes...

Interesting to see Carlos Rodriguez got an hour tonight and I'm very happy that Nicolas Gianni got a look tonight in what seems to be a 4-4-2 lineup. Disappointing that Scott Sealy wasn't able to grab another goal today, but great for Matt Hedges to get off the mark with FCD. I expect the Saturday game against Atlante U20s will finally be the first game to feature some starters.

Thanks to Jason Minnick of FCD Communications for providing this report for everyone.

"I thought tonight’s game was a just result," said FC Dallas head coach Schellas Hyndman. "We decided to give some of our newer players a chance to play since we have three games in a very short period of time. I couldn’t be any happier for our goalkeepers, in particular Richard Sanchez, who played the second half and did very well. And also Matt Hedges for scoring his first goal in an FC Dallas uniform."

Playa Del Carmen held an advantage in possession to begin the match, but was unable to break down an organized FC Dallas back line. The Mexican second division side had its first chance of the game come via free kick from the right side in the 32nd minute. A lofted ball to the back post nearly found Enrique Campuzano, but fortunately for Dallas, Ruben Luna tracked back from his forward position to force Campuzano’s header wide of the right post.

FC Dallas was lucky not to give up another goal just two minutes later as Playa Del Carmen cracked the left post and crossbar behind goalkeeper Chris Seitz in a matter of seconds.

Dallas’ best chance of the half came in the 36th minute when a corner kick taken by Nicolas Gianni found Bobby Warshaw at the top of the area. Warshaw rose above his marker to hit a line-drive shot on goal, but the attempt was directly at goalkeeper Victor Lopez.

FC Dallas opened the second half on the attack, earning a corner kick in the 51st minute. A lofted ball to far corner of the six-yard box was won by Matt Hedges. Unfortunately for the rookie, his shot was also directly at Lopez.

Scott Gordon got forward on the right flank to knock a lateral pass to Bruno Guarda at the penalty spot in the 54th minute. The Brazilian made a good run to the ball, but once again the shot was hit directly at Lopez and the game remained scoreless.

Playa Del Carmen countered, gaining several free kick attempts near the 70th minute. FC Dallas goalkeeper Richard Sanchez stood tall for the MLS side. The Homegrown player came off his line on multiple occasions to punch away crosses and relieve the pressure.

Nearing full time FC Dallas pressed in search of a game-winning goal. Scott Sealy started the rush, corralling a pass at the top of the area before being tackled to the ground to earn a free kick. The shot attempt taken by trialist Rodolofo Espinoza was partially blocked by the wall, but Jonathan Top hustled to the ball and got off a second attempt on goal that was knocked down and eventually covered by Lopez.

Moises Hernandez made a late run down the left flank that produced a scoring chance for Leyva on the opposite side of the field, but his low shot went just wide of the far post. The chance came seconds before Leyva connected with Hedges for the game-winner. 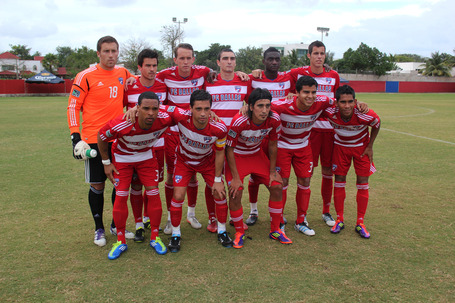 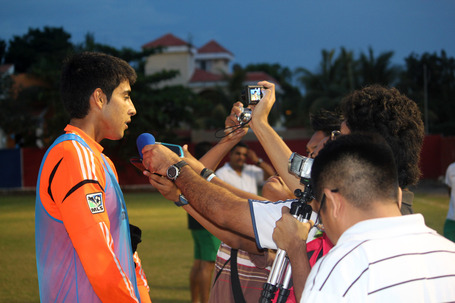 Thanks again to FCD for the pictures & match report