Who's still available in the 2012 MLS Re-Entry Draft?

Earlier this week Daniel did a great job announcing the 2012 MLS Re-Entry list, and communicating the basics of this unique player acquisition process. Stage 1 of the draft is today at 2pm CT, and there have been some changes to the list. Josh Gardner was traded to Sporting KC, and 12 others re-signed with their old clubs or withdrew their own names from the Re-Entry process.

Here's a list of all the players still available today, including their 2012 team, minutes played, salary, position, and the contract status that led them to inclusion in the draft: 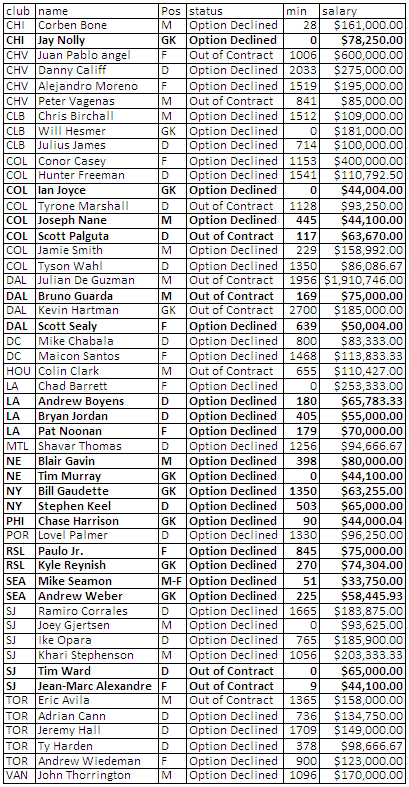 Remember that drafting someone in Stage 1 means the club commits to offering that player a 5% raise. This is why the players making $80,000 or less are in bold. Those low-cost guys are the most likely draftees this afternoon. Quite a few clubs probably have some level of interest in Ike Opara, Eric Avila, and Juan Pablo Angel, but none are dumb enough (prove me wrong, Chivas or Portland!) to take on their full cap hits.

If I were picking for FC Dallas today, I'd take a close look at Paulo Jr and Bill Gaudette for depth at the front and back of the pitch for pretty cheap. Maybe Joseph Nane for midfield depth. Other clubs might think it worth paying the asking price for Andrew Boyens, Blair Gaven, even Mike Chabala, Julius James or Hunter Freeman. I'll be shocked if more than 5 players are picked this afternoon, though.

Do you see any salaries above that FCD should pay next year? When thinking about the overpriced ones, remember that there will surely be more re-signings, trades, withdrawals, or even retirements between Stages 1 & 2.