FCD plays to their strengths, and Portland shows a leaky defense

In August, FC Dallas traveled up to Portland for a matchup against the Timbers at a steamy Jeld-Wen Field. Much like in many games this season, Dallas took a second half lead and looked to be cruising to victory before an ill-timed red card completely changed the game with the Timbers eventually equalizing in a 1-1 draw.

I thought the FC Dallas goal was pretty interesting though as it showed exactly how not to defend David Ferreira as well as exactly how FC Dallas wants to utilize Brek Shea. Let's break down the goal, then watch it in full-time.

First off, the Timbers get a weak shot to Hartman that the goalkeeper corrals easily and quickly throws out wide. 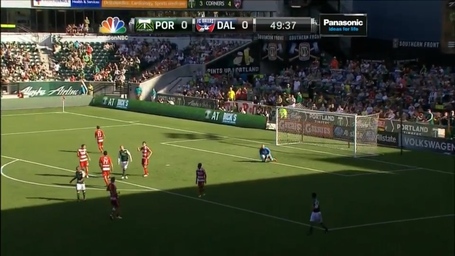 His throw is a bit errant and bounces off Timbers defender Steven Smith who takes a pretty terrible touch releasing a 50-50 ball that is chased by Fabian Castillo. 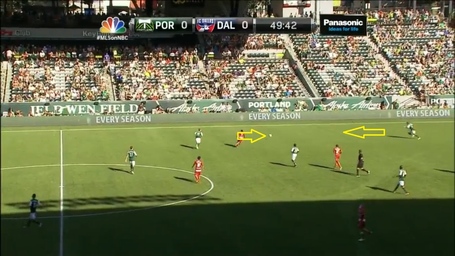 Castillo tussles with the Timbers winger, eventually winning the ball away in a rare moment of defensive prowess from the Colombian. 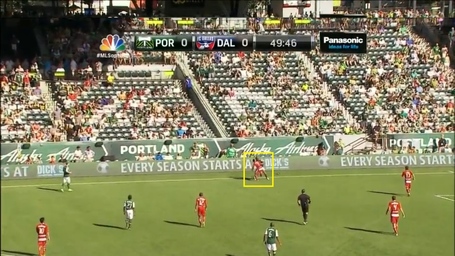 You can see Ferreira lurking below in the screencap above with Diego Chara straying from Ferreira for one of the only times in the match. Castillo wins the ball and makes a move before quickly sending it to El Torito with acres of space in front of him. 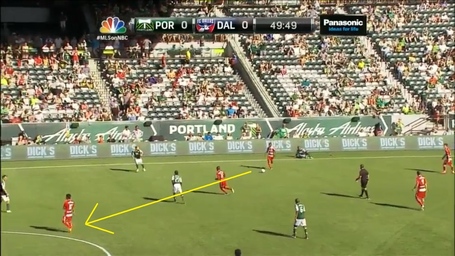 As he is accustomed to doing, Ferreira gladly turns and takes the space while you can see Brek Shea towards the bottom of the picture already making his run before Ferreira even receives the pass. 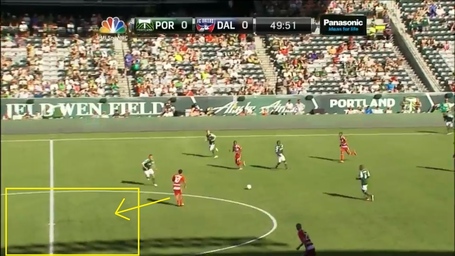 Here's where things go bonkers for the Timbers. As you'll see in the shot below, Jack Jewsbury is given all the responsibility of stopping Ferreira while the entire Timbers backline drops instead of one central defender dropping and another one stepping up to Ferreira(Mosquera should've been the one to step up) 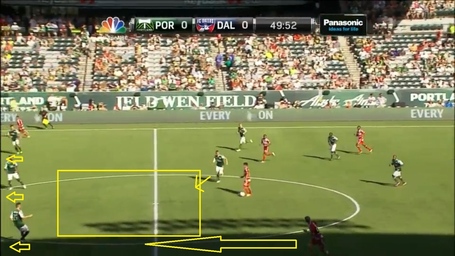 While there is space in front of Ferreira, Jewsbury is relatively close to Ferreira, but as you'll see below, he does a terrible job stopping the ball and basically sits off David, allowing him to play whatever pass he wants. This time it is the obvious option of Shea streaking down the left. 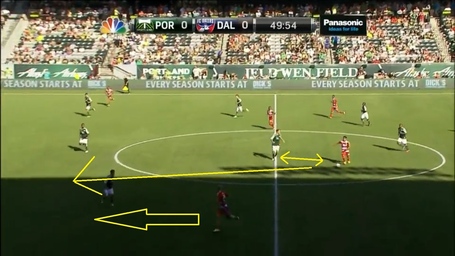 From there Shea is free and clear with speed that Kosuke Kimura can't hope to keep up with. However, there's not really a whole lot for Shea to aim for, right? Looking above you see one FCD forward at the top of the picture, but two central defenders and Kimura between Scott Sealy and Brek Shea....but wait. 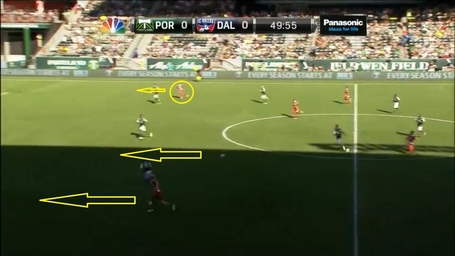 As you can see above, defender David Horst is still between Scott Sealy and the goal/ball so things should be fine as Sealy isn't someone who is going to burn a defender for speed. Inexplicably, however, Horst simply lets Sealy run right by him. 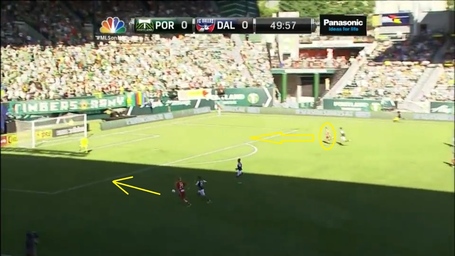 Just two seconds later, Sealy has ran right past Horst, as you can see at the top and Shea is ahead of Kimura while Mosquera makes himself completely useless in between the two Timbers defenders I already mentioned. It's pretty much over from here. 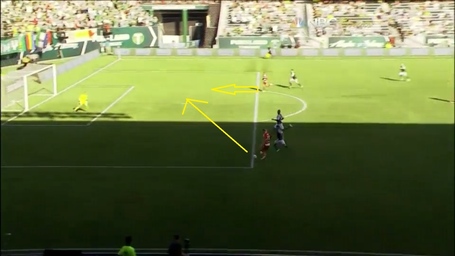 I talked in the open about FCD putting Brek Shea in a perfect position to succeed and a play like this plays to all his strengths. Good runs, speed, open space and great technique. Sealy perfectly stays onsides, Shea makes a fairly complicated one-touch cross look incredibly easy and Sealy taps home for his second goal of the year and first meaningful goal in ages. 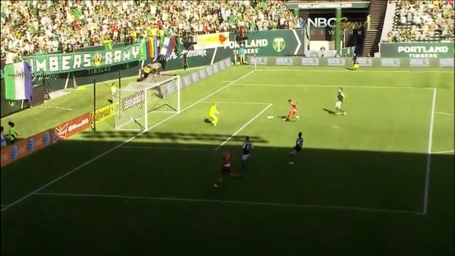 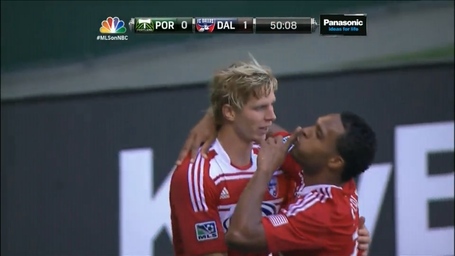 So what did we learn from this goal? Firstly, as a defender, you have to stay with your runners. David Horst letting Scott Sealy easily glide past him is simply unacceptable if I'm a Timbers fan. Secondly, if Dallas can find ways to pull midfielders out of position who are tasked with masking David Ferreira, FCD can find a lot of success as Ferreira with space in front of him is simply deadly.

Third, in this play we saw the Brek Shea of old that has been so successful. Making smart runs in open space, letting the ball do the work for him rather than trying to beat three defenders and then he's given a no-brainer decision of sending the ball across the box which he does expertly well.

Also, of course, playing a defense the level of Portland every week would be nice too.

Now watch it in real time.