Share All sharing options for: One More Time with Feeling: 2012 MLS Re-Entry Stage 2

Daniel and I co-preview the latest of many MLS offseason drafts, taking place at 2pm CT today:

Here we go again. Last week fans inspected a list of available players, some got all atwitter about who their club should or shouldn't take, then... Chicago selected Maicon Santos and everyone else passed. Stage 2 won't be that anticlimactic, but don't expect non-stop fireworks.

The main difference between Stage 2 and Stage 1 is the lack of a guarantee to the player. Anyone selected will simply have his exclusive negotiating rights within MLS transferred to a new club, though the club must make them some sort of offer. Most draftees will either agree to a lower salary than in 2012, move to another league, or retire. In fact, only about half of the draftees in previous Stage 2s drew a salary in MLS the next season, and only a couple played meaningful minutes. Generally teams will be looking for cheap depth here.

The Re-Entry Draft (RED for short) was founded in 2010, and between that year and 2011 there were 82 players in the available list, 23 of which were drafted. 4 were selected by the New England Revolution, 8 by the LA Galaxy, and 7 other clubs have drafted between 1 and 3. FC Dallas is in the half of the league that's never bothered to make a selection the RED. Yet.

Here's the full list for Stage 2 released by MLS on Thursday, with position, 2012 minutes, and 2012 salary added in: 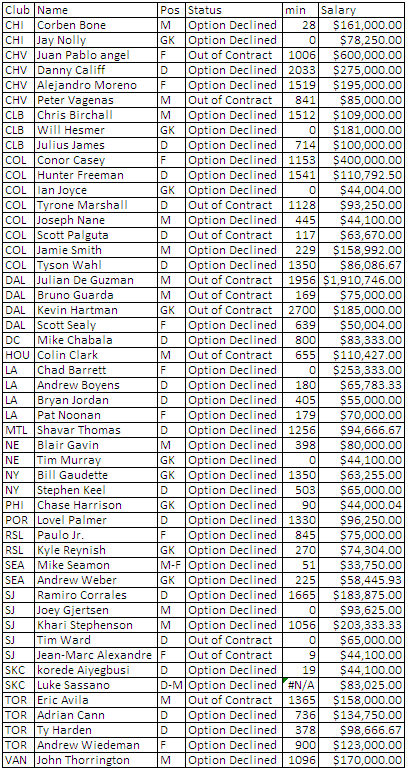 So which, if any, of these players make sense for FCD?

Well we have to look at the needs and Dallas really doesn't need any help in defense with Woodberry likely signed and two top 20 draft picks that could net a better prospect than anyone on this list.

Dallas does have a need for a backup linking midfielder, backup forward and help on the wings as well as a third goalkeeper. Clubs select until they pass, so FCD could make a few selections this afternoon. Or none, we'll see soon.

So let's troll the list to see if there's anyone worth looking at.

This is probably the name that interests me most. Bone is a player that Schellas is likely very familiar with having grown up in the Dallas area. Bone was a three-year starter at Wake Forest named the 2009 ACC Offensive Player of the Year. He's a linking midfielder with an offensive tint that you can see fitting into the spot that Bruno Guarda vacated. He obviously made a lot of money last year so he'd need to take a big pay cut, but it's a player with much more potential than anyone else in the RED and at this point, that's really what you're looking for.

People won't like this, but it wouldn't surprise me at all to see Casey end up in Dallas. For a team that needs to add a couple forwards, Casey is a guy that can slot in as a backup to Blas Perez and has the talent to truly push the Panamanian for a starting spot if he can stay healthy. His scoring record in MLS speaks for itself(50 goals in 121 games) and with Fernando Clavijo being the one who brought him to the Rapids, it just makes a lot of sense. Obviously at a MUCH lower price though closer to $100k.

While we're discussing old guys with a nose for goal, why not take a look at JPA? Last year, playing low minutes on a horrible Chivas USA offense, he still managed to to be in the top 20 of the league in goals per 90 minutes, and took more shots per 90 than anyone who played at least 500 minutes. Would also require a huge paycut, but so do most useful players on this list.

The Brazilian has spent the last three years bouncing between RSL and loan spells in the lower league. He's a nice change of pace forward that, if put as the #4 forward, possibly offers more than someone like Scott Sealy. The big question on Paulo Junior is will he count as an international or does he have a green card? According to Wikipedia, he doesn't, but that's by no means authoritative. If he's an international there's no chance he gets picked by FCD.

Reynish has been the backup goalkeeper at RSL under Nick Rimando for many years, but I wouldn't mind FCD taking a look at him. I've been impressed by him in the games that I saw and at 29 years old, he's just entering his prime. At 75K he's not going to break any banks and as the 3rd option for FCD and a guy to push Chris Seitz when Sanchez isn't around, I wouldn't mind giving him a shot.

A very good keeper when he's healthy. That hasn't been often of late, which both makes him a risky pickup and probably slashes his asking price way below last year's salary of 181K. At 30, Hesmer is young for a keeper, but would still be a gamble, and picking him would hopefully mean that the medical staff was very impressed with his recovery from hip surgery.