Breaking down two plays from the Chivas USA game

Something I want to do over the off-season is break down some goals throughout the year, both goals scored and goals allowed, to find out some of the things this team does very well on offense and some of the things they need to improve on with the defense. The first one I'm going to break down is Fabian Castillo's sixth goal of the season and the second in the 2-2 draw with Chivas USA as well as a similar play in the game.

When you have Blas Perez, Fabian Castillo and David Ferreira on the field, very good things happen for FC Dallas. Ferreira and Castillo seem to have a sixth sense of where the other one is and that's been evidenced by the huge uptick in goals from Castillo after the return of Ferreira from injury.

The second goal against Chivas USA demonstrates a few things. The first one is just how quickly explosive the offense can be when Castillo is on the pitch. Speed kills and over 90 minutes, Castillo is simply always going to get an opportunity or two. The second thing we learn from this goal is exactly how not to defend against Castillo. Let's look at the tape. 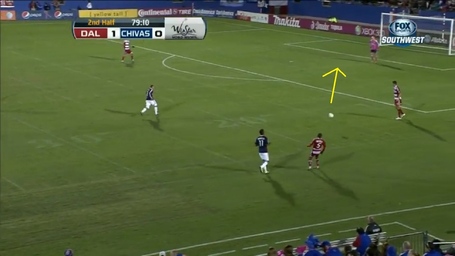 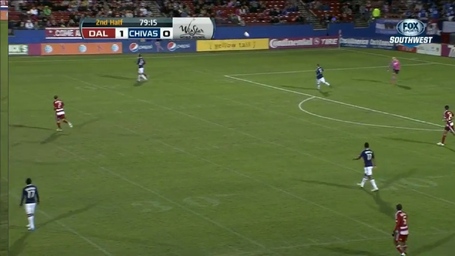 Whether by design or not, Hartman's distribution was again perfect finding Blas Perez, amazingly in acres of space with no one around him. Being the CONCACAF-level target forward that he is, Perez is able to perfectly flick a header straight to the feet of Ferreira. 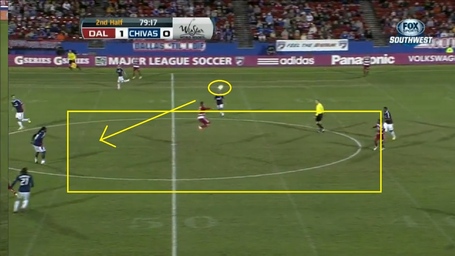 Ferreira takes a perfect touch to neutralize Zemanski and Joseph, allowing him to take off forward. 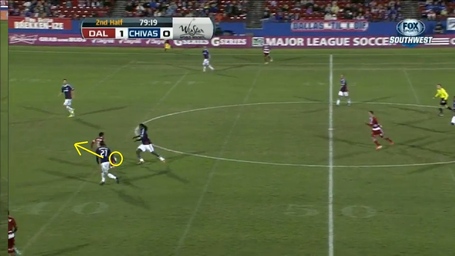 With the speed of Castillo on the wing and Zemanski still focusing on Ferreira, the play is pretty much already done before it starts. With the perfect touch of Ferreira, Zemanski doesn't have time to make the decision to close space on Castillo behind him and Ferreira plays a great ball to the Colombian streaking in on goal. By now, the fate is written. 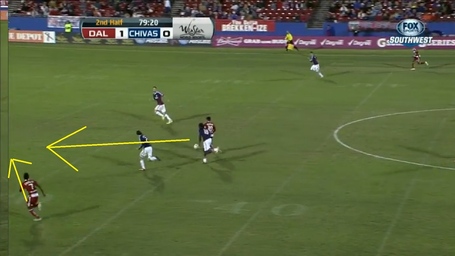 There's way too much space between Zemanski and Castillo, with Fabian taking a good first touch on the ball to head straight in on Melia's goal. 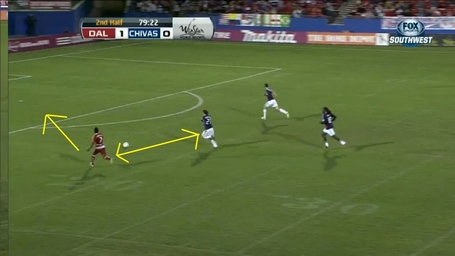 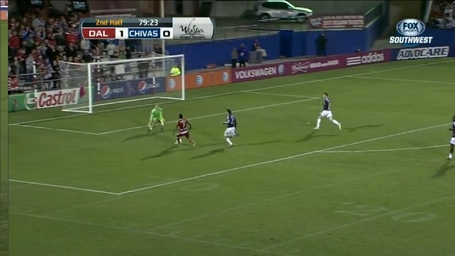 As a bonus, I want to highlight one other play in the match that caught my attention. With the game 0-0, a long ball was played to Juan Agudelo that Kevin Hartman was able to corral. 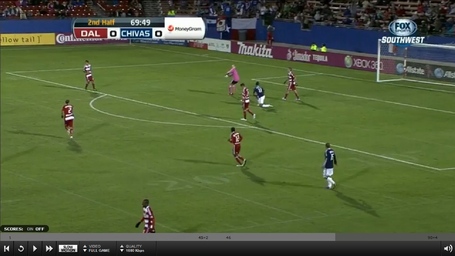 As you can see, Hartman decides to throw the ball out and Chivas USA seems to have things pretty well handled with seven of the eleven Dallas players in the picture and near the FCD penalty box. Hartman displays some unreal distribution sending a frozen rope of a throw literally straight to the feet of Ferreira...David is able to take the ball with one touch to turn and go 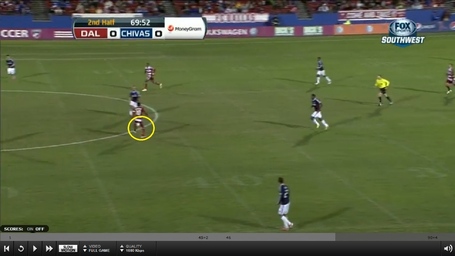 That's three seconds from Hartman getting the ball to having Ferreira in a good position with the ball....As Shalrie Joseph comes to shut him down, Ferreira takes a ridiculous touch that neutralizes both CUSA midfielders. 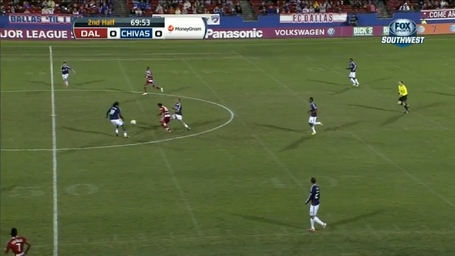 Now Ferreira is in the exact position where he's arguably the best in the league: running at defenders with the ball and three options to choose from, Castillo on the left(out of the picture), Jackson on the right and Perez in front of him. 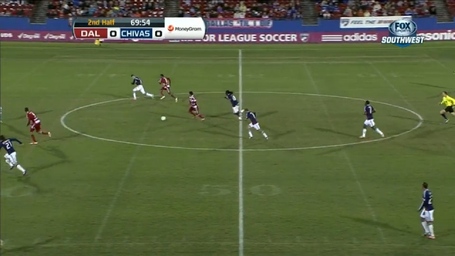 With Perez double teamed and not enough space for Jackson, Ferreira makes the correct decision to spray the ball out left to Castillo 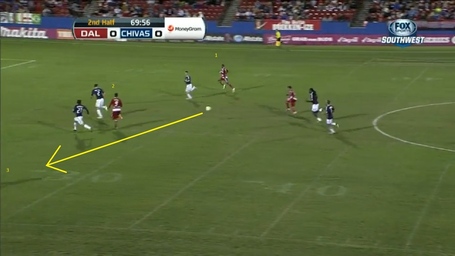 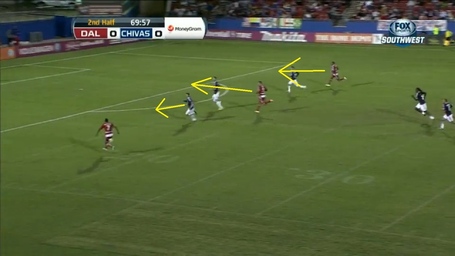 I've placed the highlight on Ben Zemanski in this next frame to illustrate how he, fairly bizarrely, shows Castillo onto his left foot. Anyone who has scouted Fabian Castillo knows that his left foot is way more deadly than his right foot, but Castillo instead chooses to keep the ball on his right foot rather than take it to the endline 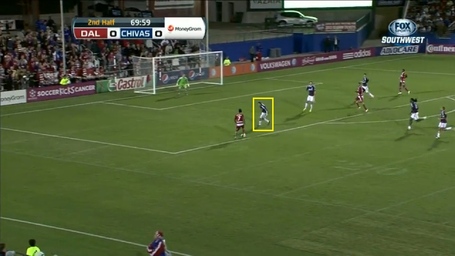 Castillo ends up curling a right footed shot that didn't have enough power on it. As Perez bore down on goal, Melia was able to save and hold onto it which was extremely important considering had the keeper spilled it, Blas would have tucked it home easily. 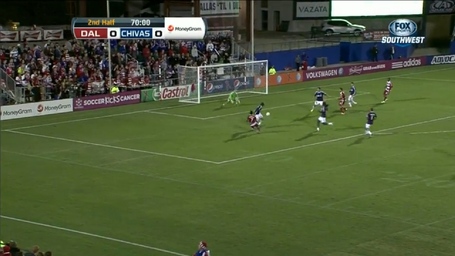 It wasn't an awful decision from Castillo, he got a shot on goal that could have produced a score if he had gotten more power on it. However, with Perez and Jackson 2v2, Castillo probably would've been better served to make one of his trademark runs to the endline and send a hard, low cross in the direction of Blas.

So what do we learn from these two plays? The first thing is that both these scoring opportunities came within ten seconds of Kevin Hartman having the ball in his hands or at his feet. That's a quick strike offense and it also shows just how good Kevin Hartman is at distribution.

The second thing we see is that both plays start with a fantastic first touch from David Ferreira. The brilliance of Ferreira was displayed on both plays where, with two defenders around him, the Colombian was able to take a first touch that completely took both of the defenders out of the play.

The third thing we learn is that whoever the outside back is that has the task of defending Fabian Castillo, turning your brain off for just a moment and allowing an extra 5-10 feet of distance can be the difference between life and death.

And the final note is that if you're a defender, for Castillo to beat you with his right foot and not with his left. If Castillo can just improve his decisions by a little more going forward, he could become both the goal scorer and the goal provider that would push him into the MLS Best XI talk.