An immature response to Houston's 4th MLS Cup Final that you can hang on your bathroom mirror or door.

Share All sharing options for: We All Hate Houston: DFW Bathroom Decoration

For the third straight year, FC Dallas supporters have a clear rooting interest in the MLS Cup Final. Unfortunately for Dallas fans, rooting against Houston has been the basis of any such passion for the 2011 and 2012 finals. Almost as disappointingly, that has meant pulling for David Beckham, Landon Donovan, and Robbie Keane two years in a row. Nonetheless, when the Dynamo are involved, FCD supporters root for the other side. CCL matches against Mexican clubs are the only possible exception.

Because we don't have a claim to on-field superiority this season, let's go childish. DFW waste water gets refined and recycled into Houston drinking water. Talking shit has seldom been this literal: 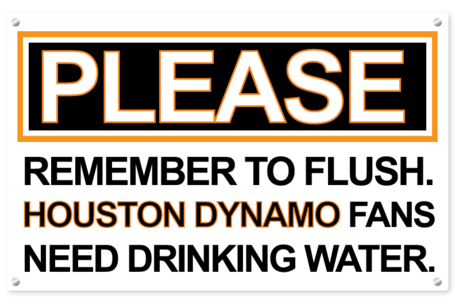 Dallas Beer Guardian Brian Price helped me design that image. Click for a slightly larger version, and feel free to confidently post it near any DFW toilet or urinal that would allow such decoration. You will seldom find immature trash talk that is this accurate.