Playoff Hopes Dim for FCD, with Tragic Number Down to 3

The FC Dallas playoff hopes obviously took a huge hit with the draw against Chivas USA. Vancouver dispatched of the Goats no problem meaning Dallas had to win to hold serve, and they weren't able to do it.

We've talked at length about simply holding serve and keeping the deficit to 3 points or less going into the final weekend of the season which would force Vancouver to get a result at Real Salt Lake, but now even that scenario is out of FCD's hands. 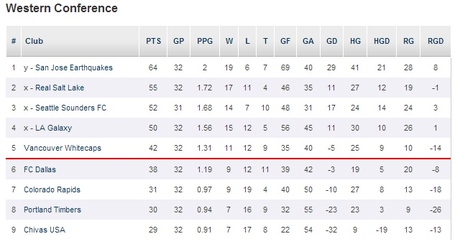 As you can see, Dallas is four points behind Vancouver with two matches to play, meaning their tragic number, combined dropped points by FC Dallas and points gained by Vancouver, is at just 3.

That means two things absolutely must happen if the final weekend of the season is to matter: Vancouver cannot beat Portland and Dallas cannot lose to Seattle. Should Vancouver draw Portland, Dallas must win at CenturyLink Field and should the Whitecaps lose to the Timbers, Dallas must at least draw on Sunday night.

Yes, that means Dallas may be eliminated from playoff contention before they play another match.

There are two reasons to be optimistic about things, however: Portland has a hell of a lot to play for as they travel to BC Place next Sunday night. Their loss to Seattle means only a win for the Timbers against Vancouver would secure the Cascadia Cup for Portland, a very important trophy that they've put a ton of emphasis on in this lost season.

The other reason to be optimistic is that Dallas hasn't lost at CenturyLink Field since 2009.

The focus of everything becomes Vancouver's match vs Portland which kicks off two hours before Dallas takes on Seattle. The destiny is out of FCD's hands, but the pendulum can swing very very quickly if Sunday, October 21 goes well for FCD. It's about all they have at this point.