There's a dozen things we could go over from this game, but suffice to say it's the same things we've been saying all season. You've got to hold onto your leads to have success in MLS and late goals will kill you. My thoughts from the final match of 2012:

Carlos Rodriguez Schellas Hyndman said after the game that he was looking closely at a couple of players on option years and you've got to think Carlos Rodriguez is among them. The Panamanian was given a full 90 minutes on Sunday and he kind of showed the problems that the defense has been showing all year. Rodriguez was very good through the first hour, but faded very badly in the last 20 minutes getting beaten time after time on the right side where the winning goal came from.

Rodriguez was brought here on loan this season with a purchase option for next year and you wonder what his status will be next year based on this game. He's a good glue guy to have towards the bottom of the bench as someone who can chip in at four different positions, but he didn't do himself many favors last night.

Microcosm of the year As I said last night, this game was just a microcosm of the entire season and it's unacceptable. People can say what they want about performances, but the first halves are very good(save last night's). It's not a talent thing and it's not a physical fitness thing. It's mental fitness thing, being smart enough to know the situation every moment of the game.

Team defending Players and Schellas talk about defending as a team all the time and you simply didn't see that at the end of the game on Sunday night. Look at this screengrab. 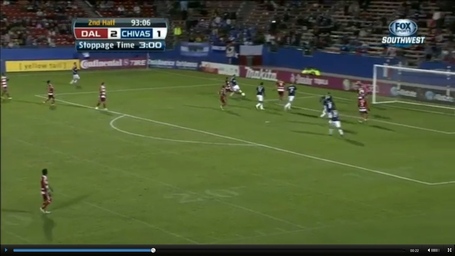 On the last play of the game, I count 6 Chivas USA players in the box and 5 FC Dallas players. How in the world does that happen. It's the back four and Andrew Jacobson, that's it! Simply unacceptable to defend like that in the waning moments of the match. It's really no wonder why goals like this have been given up all season. Agudelo had time to receive the ball and turn 6 yards from goal...mind boggling.

Fabian Castillo He was one of the biggest defensive culprits and should have been subbed off with five minutes to go, but otherwise he had a fantastic game I thought. At just 20 years old, Castillo finished with six goals on the year, a healthy total, and I think it's within him to push for an MLS Best XI place next season. For me, the man of the match last night.

The Biggest Mistake In my opinion, the biggest mistake made by Hyndman this evening was not subbing out either Ferreira or Castillo for Warshaw late in the match. Schellas mentioned after the game that the team probably should have stopped trying to get the third goal and just defended the lead. Subbing in Warshaw would have been a great way to do that as Ferreira was just standing there near midfield during the Chivas USA goals.

Scattershooting...Another great crowd, probably the best story of the season is great crowds all year...Even the injuries followed the script and there could have been a red card in that skirmish late in the game...I didn't expect a whole ton of turnover this off-season, but now that seems likely...Jackson is such an interesting player, three years on and I really have no clue if he's one of the best in the league or someone to ship away...you should never judge a player by one game, but man this game didn't show well on a few guys...Going to be an interesting off-season, hope everyone sticks around and gives there opinions.