Reader and DBG member Brian Price helps me imagine what the red stripes would look like if they altered their uniforms for Breast Cancer Awareness Month.

Share All sharing options for: How FC Dallas' Kit Would Look if They Went Pink for October

October is here, which means that you will be see accessories on athletes in every American sports league over the next few weeks shining brightly to cast attention on breast cancer. During the next four weeks the proliferation of a feminine color on the gridiron, pitch, court, diamond, ice etc. will be an accepted part of our cultural landscape. I've heard it even pops up in video games now. Of course, MLS are among the leagues taking part, and they promise to offer pink scarves, sweat bands, hats, t-shirts and replica balls, though so far only the balls have appeared on mlsgear.com.

Very few fans seem to have a problem with this, and many are happy to buy and wear pink accessories of their own. What if a team went beyond accessorizing, though? As far as I know, the only athletes in major American sports to incorporate pink into their jerseys have been some isolated MLS goalkeepers. What if FC Dallas led the way and altered kits they would wear in October to include pink on some level? After all, 2 of the largest breast cancer awareness non-profits are local. Susan G. Komen for the Cure is headquartered in Dallas, and the National Breast Cancer Foundation's mailing address is only 5 miles away from FC Dallas Stadium.

I pondered this issue on twitter over the weekend with some rough mockups adding pink to the home and road kits. Dallas Beer Guardian Brian Price responded positively, which is quite generous since he is a graphic designer who's capable of much better, professional conceptualizations. When I asked if he would be willing to Photoshop his own versions onto a picture of Brek Shea, he said he would be happy to do so. 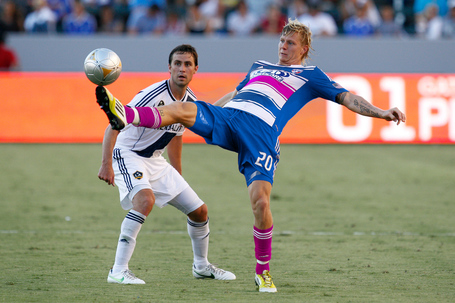 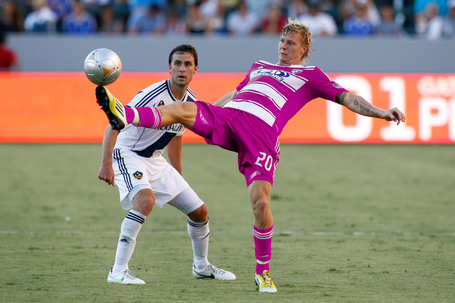 None of this is to say that FC Dallas or any sports team is obligated to alter their uniforms for breast cancer awareness month. It does seem that FCD has a kit that incorporates pink well, and the local ties make it an interesting hypothetical.