FC Dallas Heads Into Seattle Showdown Without A Full Deck

Share All sharing options for: FC Dallas Heads Into Seattle Showdown Without A Full Deck

When FCD hops on a plane headed for Seattle on Friday afternoon, it's looking like they could be doing it without many of their best XI.

In an homage to the troubles that haunted them earlier in the year, FC Dallas will definitely be missing Julian de Guzman for Sunday's match due to yellow card accumulation. As I wrote for MLSsoccer.com yesterday, that shouldn't be a huge deal as Daniel Hernandez should bring an emotional lift to the team in his return to the starting lineup.

"It’s huge," midfielder Andrew Jacobson said. "He’s seen everything and been in every situation. He gets a lot out of people and demands a lot out of everyone in a way that lifts you. It’s something that a lot of people aren’t born with and he’s got it for sure."

Hernandez's return will certainly add some spice to the match as I'm sure many in Seattle haven't forgotten about this...

But de Guzman's absence is, unfortunately, the least of FCD's problems.

Wednesday morning practice was a bit of a limited invite affair as Dallas is still without starting wingers Brek Shea and Jackson. Both are listed as questionable on the MLS Injury Report, but man it sure seems unlikely that either plays on Sunday barring some miraculous recovery.

The other player still hobbled that you see there is George John who tested his ankle yesterday and will likely have the same role against Seattle that he had against Chivas USA, coming off the bench if needed later in the game.

So you're looking at missing four starters for Sunday's (hopefully) crucial match which would bring a lineup for FC Dallas something along these lines: 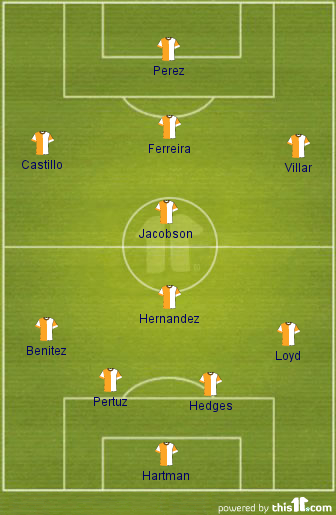 We could see Carlos Rodriguez start on a wing position as well, but it certainly seems like Hyndman is giving Ricardo Villar his shot to prove his worth to the team for 2013.

Given the players available, would you make any changes to this lineup or keep it the way it is?