Rookie defender gets policial-based ad for his rookie of the year campaign.

Share All sharing options for: FC Dallas Pulls Out Political Campaign For Hedges

Ah, awards season is upon us in Major League Soccer. I love it when teams get creative too. FC Dallas has done this in the past with players who were gunning for an award. Last year it was Brek Shea going for the MVP award. The team sent out a nifty little gift package to the media that included a mug, a jump drive with videos and info on Shea and more.

This year, the club is pulling out all the stops for rookie center back Matt Hedges.

The team has created a campaign website for Hedges with a cute slogan called Hedge Your Bets. 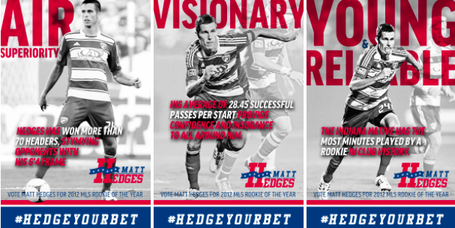 Creative, clever, and any other adjective you can come up with here. I love it. Will it be enough to get by Chicago Fire defender Austin Berry though for the award? We'll see. I think Hedges has had a strong rookie campaign and has certainly placed himself in the discussion for the award this season.

What do you think of FCD's campaign for Hedges?