Share All sharing options for: A Rough Look at FC Dallas Salary Cap

With Philadelphia dumping players right and left to free up cap space and money, it got me to wondering how FC Dallas is looking in terms of cap space. It's impossible to know exactly how things are going, in the ever-changing world of allocation money, paying parts of contracts for traded players, etc...but I put together a little something to give a VERY rough idea of how things are looking.

First off, I only counted the players that Dallas is pretty much certainly bringing back next year. Players like Ricardo Villar, Daniel Cruz and Jack Stewart are not included. Also not included are Blas Perez, Hernan Pertuz and Carlos Rodriguez, the last of which Dallas has signed on a loan to buy deal which means any transfer fee probably wouldn't affect the cap too much in 2012.

If I had to make a wild, completely uneducated guess, I would say those three players account for around $500,000 of cap space give or take. Perez likely earns very close to DP money which I'm rounding to $300,000 while Rodriguez and Pertuz probably average out to somewhere near $100,000 each. This is probably a high estimate, but for these purposes it's better to guess high than low.

The next variable that is unknown are the numbers of Jair Benitez, Andrew Jacobson and Daniel Hernandez, with all three signing new contracts in the off-season. I lowered Benitez's $171k number to $150k, raised Andrew Jacobson from $45k to $100k and left Daniel Hernandez the same. It's all fuzzy math, but probably works out about right give or take. I added Matt Hedges at $55,000 which is probably a number that's about right.

The MLS 2011 budget for the 20 senior roster spots was $2,675,000 which has probably gone up a little bit, but not enough to change for these purposes. Also, most contracts generally go up slightly from one year to the next. Again, just another variable that could add or subtract from the salary cap space Dallas has, but I'm being ultra conservative on all this. There is a chance Warshaw or Hedges are on the off-budget roster meaning their salary wouldn't even count towards the cap. 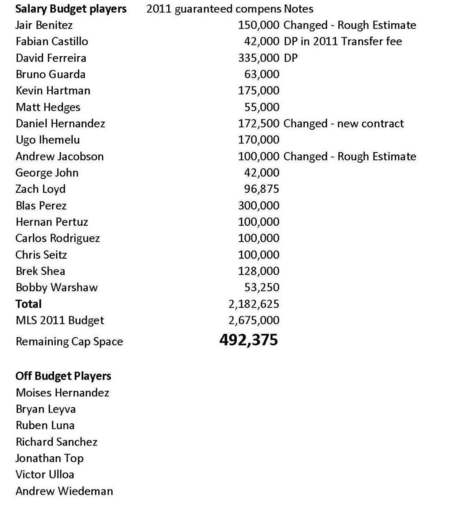 Again, please take this with an enormous grain of salt as there's so many moving parts in this that it could be off by as much as $100-200k one way or the other. I feel fairly confident in saying FC Dallas is somewhere around $500k under the cap for the 24 players mentioned above and if I've erred it's probably on the good side. Just a broad snapshot of things.

While that sounds like a lot, you're looking at 5-6 players you have to bring in for that amount and if you bring back Ricardo Villar it takes a huge chunk of that to the tune of somewhere between 100k-150k and Scott Sealy, if signed, is probably around $100k....there is certainly room, however, to sign another impact player.

All info on player contracts has been taken from here.