Here we are, September play in Major League Soccer. FC Dallas has seven league matches left on the slate and will kick off that stretch run tomorrow night against the New England Revolution.

For once Dallas is going to be the more rested club for this match as the Revs had a midweek game in Philadelphia that ended in a wild 4-4 draw. The Revs had a 4-1 advantage going into the second half but were unable to hold on to that lead as the Union stormed back with a couple late goals.

The bigger questions will be how Dallas will deal with the loss of broadcaster and former midfielder Bobby Rhine.

1. No Ugo Ihemelu in the back, who does Dallas turn to then? Its almost a good news/bad news kind of situation for Dallas. On the good side they have George John back and ready to go, but on the bad side his partner in crime (Ihemelu) is out for this game with a yellow card suspension. Schellas Hyndman will likely turn back to Zach Loyd to cover for Ihemelu in the middle. Loyd seems to be fit enough right now and he looked very good in last weekend's friendly with Tigres.

2. A different Revolution. This is a slight different New England side than the one we faces back in early June when Dallas won 1-0 on a second half goal from Marvin Chavez. The Revs didn't have young Designated Player Milton Caragilo or US National team midfielder Benny Feilhaber. We know the Revs can score thanks to these two guys and with how Shalrie Joseph plays in the middle.

But on the flip side this will be a different Dallas squad that New England is going up against. Dallas didn't have Maicon Santos or Daniel Cruz in the lineup. Those are two key guys for this match tomorrow night for Dallas.

3. Winning in Foxborough. All-time in New England Dallas is 5-11-1. That lone draw came a year ago against the Revs. The last win for Dallas up there was back in 2003. It doesn't matter how bad the Revs are here this season, that kind of winless streak against someone can always be rough to deal with. Whether it be the nasty turf there or what, Dallas has to brush aside the bad history of playing up there and get a result. Biggest way to do it is get a goal early.

It's always fairly simple with the Revs, as he goes so does this club. Stop him, and you stand a good chance at getting a result here against them again.

The young DP has looked pretty good so far. To be fair he hasn't played against a top defense like Dallas just yet. 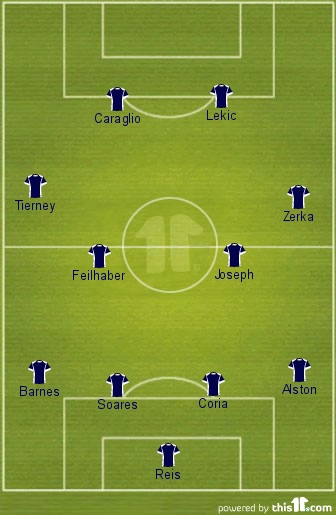 Notes: Feel pretty decent about this lineup, it came from the game notes the two clubs put out. It will be interesting to see if Steve Nicol has any other changes since his club did play on Wednesday.

This is a game Dallas should win. We know how rough the month of August was for the club and with the week they've had but this is a game they need to win. With Colorado and RSL lurking in the background in the standings, Dallas cannot afford to drop points in a game like this, against a club that is near the bottom of the league table. I do worry about the fitness of Brek Shea for this one as he looked gassed in the Belgium friendly earlier this week with the US team but if Hyndman is wise like we all know him to be we should see some quality subs that help break open this game.