Like I mentioned yesterday, October is finally here. Four more regular season games left for FC Dallas and a big one is set for tomorrow in Commerce City, Colorado against the Colorado Rapids. The MLS Cup rematch of some sorts, though Dallas already got their revenge for the Cup earlier in the season when these two faced off in Frisco. Dallas won that game 3-0.

Fast forward to today and this game looks completely different than it did earlier in the year. Both teams are without key players, Dallas with David Ferreira and Colorado with Conor Casey. Each club has a dire need of points in this one, the Rapids more so than Dallas at this point seeing how teams in the Eastern Conference are starting to pass them in the standings.

Both teams are coming off different results in the midweek in the CONCACAF Champions League. Thankfully for Dallas, the Rapids did have to take to the road in their match so both teams should have equal rest.

1. Will Colorado be the place to end the funk? We've been wondering this for a little while now, okay, well a lot longer than any of us ever really expected to. The last two months of the season haven't exactly been kind to Dallas. But at some point something has to give right? We finally some some bite and fight out of the club in Panama on Wednesday in the 5-3 loss at Tauro. While it was a mix of reserves and starters due to suspensions, the emotions finally really seemed to come to a surface for the club in the loss. I've seen the guys after the last couple home losses and I can tell you after each one no one wanted to really speak about the games. But like Daniel mentioned a couple times, after Tauro no one spoke.

Emotions play a huge part in the game and I think having them finally and really come to the surface is a good thing for this Dallas side. It is time to use those emotions and use them correctly. The goals will come in league play. Let's be real honest about that for a moment. This club is totally due for some goals. Maybe not a big outburst of goals but they are definitely due to score a couple. This remaining stretch of games is about playoff positioning and getting the offense back on track for the playoffs.

2. Shutting down Omar Cummings. When Rapids' manager Gary Smith has used Sanna Nyassi and Cummings up top together this club has been really tough to handle. But for some reason the last couple of games he has used Nyassi back in the midfield with Caleb Folan up top with Cummings. Not to know Folan but he and Cummings just haven't clicked as much this season as some would have hoped. Nyassi will still see his fair share of shots, as will Cummings. Dallas has to be quick in the back and contain the speed of these two to remain on top of things. When Colorado visited Dallas earlier in the season neither were a factor in the game.

3. Battling fatigue. This has obviously been an issue for both sides as of late. The CCL has done a number on each side and while the Rapids have tired to mix up their lineups in CCL play, their regular season play hasn't been all that great. Same can kind of be said for Dallas, who haven't mixed things up all that much in CCL or MLS play. Both teams are tired but each have a bit of a break after this game due to a FIFA date coming up. This is one of those games where you throw out everything you can in hopes of getting three points since you have some time off coming up. Hopefully we can see more of Ruben Luna or Bobby Warshaw in this game as I felt both have been solid in CCL and reserve play as of late.

I still view Big Red as one of the most underrated players in all of MLS. He recently got a USMNT call up with Brek Shea for the upcoming friendlies. That should show you a thing or two of his worth to this club.

Okay Mac isn't exactly young like a rookie but he's back to health after his injury during MLS Cup. He's a guy Dallas has to focus on when he comes into this game as you know he can be a killer. 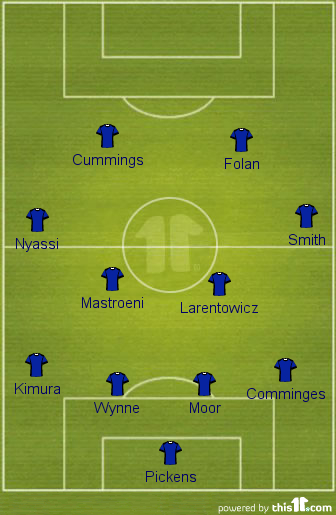 Notes: this roster is based off their last game with San Jose. We could see someone like Wells Thompson in the back or even Kandji get a start on the wings.

LIke I've said, this is a must-win for both clubs but more so for the Rapids. Dallas just needs to get their offense going early and make the Rapids chase the game. The longer this one remains at a deadlock the more it favors Dallas really. Just getting off the mark and getting points in this game is what Dallas needs here going into the final games of the season. The way things are looking Dallas will have to go on the road in the playoffs anyways so time to start getting used to things away from home again. They did it last year and can do it again this season.