The playoff picture is really much the same as it was last week in the fact that 4th place is about the only outcome that makes sense for FC Dallas at this point in time. Dallas currently sits 5 points behind RSL in 3rd place while 2nd place sits well out of reach with Seattle 8 points ahead of FCD.

Colorado is creeping up on FC Dallas, having earned a point last weekend to pull within 4 points of Dallas with a game between the two clubs looming this weekend. As it stands right now, if Dallas pulls off any sort of draw or win in Saturday's game, the race for 4th place in MLS is pretty much over. Even if Colorado wins on Saturday, Dallas would sit a point ahead with a game in hand with their last three games coming against Chicago, Vancouver and San Jose. Right now it's looking about 75% for the #4 seed. 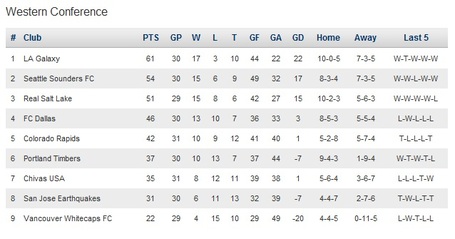 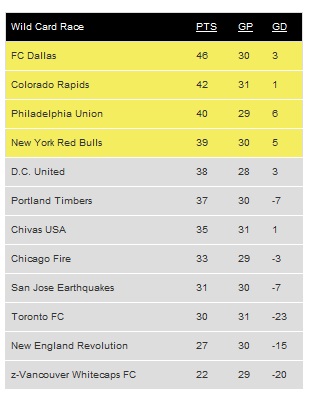 So yes, if the playoffs ended today Dallas would host NYRB in a one-game showdown for a chance to take on Houston in the semifinal round. However, DC United is in with a huge shout and there could really be about 5 teams that Dallas could face.

It's still completely wide open with 4 games to play. Who would you want to play in the first round? Could a 2-leg showdown with Houston be on the cards?