The second leg of the Texas Derby is finally here. FC Dallas hosts the Houston Dynamo this weekend and hopes to keep the El Capitan cannon for another season. Dallas has won the last two season series with their rivals from South Texas.

Houston is coming up to Dallas in search of their first road win of the season. Hard to believe it but the Dynamo are nearly into October without a win away from Robertson Stadium. They hope to get it tomorrow afternoon as Dallas is currently in a slump at home, losing their last couple games at home in all competitions.

1. What kind of mental state is Dallas in right now? For the most part they are drained. No wins in any meaningful game in what seems like a long time (yeah the KC game wasn't that long ago, neither was the win in Toronto in the CCL but still). The offense has been absent in the last couple games and until that changes the slump could easily continue. We talked earlier in the week after the New York game about seeing a spark or some bit of luck to get the guys back on track. We haven't seen it yet but maybe having to deal with a rivalry game like this one could help spark them and get them out of this mental and physical funk that they are in.

2. Can Houston finally put it together on the road? I know what some Dallas fans are thinking, Pizza Hut Park would be the first place this season that the Dynamo would get a road win in. Confidence in Dallas isn't high at the moment and while the form of the Dynamo isn't great, they have looked decent in their last couple of games by beating San Jose last week and having a wild 2-2 draw in Columbus in the middle of last week. It seems every time the Dynamo get close to getting three points on the road their defense buckles or something crazy happens and they fail to get it done.

They're a decent enough team to get a result but you know they'll be really searching for it in this one. It is one of those things where Dallas has to be careful about their aggressive play and not let it get to them. The Dynamo will be gunning for it in this one and will throw everything they have at Dallas. Keeping a level head and getting on the board early will be key.

3. Can Maicon Santos or someone please score a goal? After last week's eight or nine shots from Santos the thought came to me, he's gotta be due for a goal right? As long as we have a remotely healthy Brek Shea or Marvin Chavez out there to help service him the ball, things will happen. Mark my words.

Cameron has settled in nicely here lately for the Dynamo. Ever since going back into the defense the Dynamo have looked more confident with him in the back. Still with him and Bobby Boswell, there are chances for mistakes if Dallas can capitalize on them.

(The Dynamo also have this guy named Brad Davis who is pretty good too. It really was a toss up in this spot for me between him and Cameron.)

The young Brazilian has settled into the Houston midfield very nicely over the last couple of games. Expect him to be a key part of the Dynamo possession game. 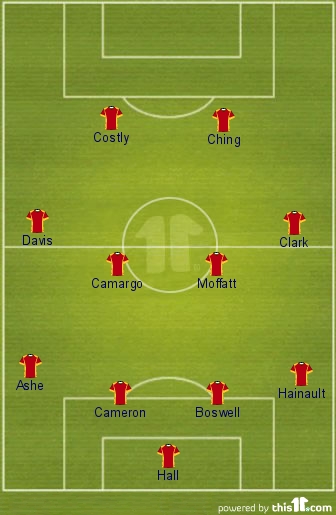 Notes: this came out of the game notes. I'm not entirely sure of the status of Brian Ching but I can't see him missing a Dallas game. Colin Clark is another I'm interested in seeing, he scored the game-tying goal the last time out against Dallas.

Something has to give in this one right? Houston is a decent enough team that needs points at the moment to reach the playoffs that you know they will be gunning for three points. Dallas on the other hand has to get out of this funk and really this would be an excellent time to do so, against an in-state rival. For the most part this one likely will end in a draw but if Shea, Chavez, Santos, Ricardo Villar or someone off the bench like Ruben Luna, Andrew Wiedeman, Jeremy Hall, or someone else can get the offense going I can't see the Dynamo scoring too many (if any) goals on our defense.