So things aren't going so well right now as we all know. The current slump has seen Dallas fall to 4th place for the first time in months and RSL looks poised to put FC Dallas in the rear view mirror. Let's look at the numbers...

With 5 games left, Dallas sits 5 points behind Seattle and 2 points behind RSL who has 2 games in hand on FCD. The good news for Dallas, as we've discussed, is that while a 4th place finish means an extra playoff game in Frisco on the Wednesday or Thursday after the season ends, it also means Dallas moves into the much easier Eastern Conference playoff bracket should they get through that playoff game against the #10 seed. 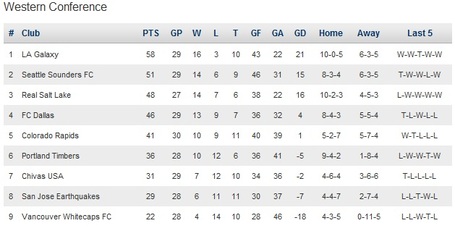 Right now, barring a total collapse, the #4 overall seed is looking very likely as Dallas sits 5 points ahead with a game in hand of Colorado their only real competition for 4th place considering the top 3 in the East get an automatic bye into the semifinals.

The interesting question now is, should Dallas move into the Eastern Conference semifinal playoff bracket, would they automatically be the favorite?