Don't look now but fall is right around the corner. That may be a good thing for FC Dallas considering their current slump/form in league play. Injuries are piled up, players are tired from the extra games this season and overall form has just suffered recently.

But saying all of that may not hold a candle to what Dallas' next opponent has been dealing with these last two (going on three) months. The New York Red Bulls haven't seen a win since the early part of summer, back at a time when they were thrashing people left and right with their high powered offense. Since then it has been one disappointment after another between their defense and goalkeeper situation.

So with the playoffs near and both teams on bad form, this game tomorrow has so much meaning behind it.

(read on for more thoughts, questions, and potential lineups)

1. Even without Brek Shea and Marvin Chavez, who can Dallas lean on to get the offense going? Something has to give in a way in this game. New York will be without their key defenders in Roy Miller, Rafa Marquez and possibly Tim Ream who is on the injury list. In a way that counters Dallas being without Shea, Chavez and Fabian Castillo, so the offense has to get generated through Maicon Santos, Jackson Goncavlez and Ricardo Villar.

We saw on Wednesday in the Champions League that Jackson is not a lone striker, at all. Things should be better this weekend when he is back on the wings and Santos is running the show from the top. Possession will be key from Santos and the midfield. I think another game with the usual back four and the midfield pairing of Andrew Jacobson and Daniel Hernandez should certainly help.

The Red Bulls will likely be going with a back four of Ream (if he's good to go), veteran Chris Albright, Stephen Keel, and Carlos Mendes. Even without Shea and Chavez I like FCD's chances against those four.

2. Taming Henry. There is real no easy way of putting this but Dallas has to shut down Thierry Henry. There is still a question as to whether or not Luke Rodgers will be good enough to go in this one but really it boils down to keeping in front of Henry. He burned FCD last time around with a late goal to tie the game at 2-2 after Chavez helped carry Dallas to a 2-1 lead. Teams have been able to shut him down this season when they slow down his passing lanes from the midfield. That is where Hernandez and Jacobson come in to play. They have to shut down the lanes from Joel Lindpere and Teemu Tainio.

3. Possession is key. This will be one of those games where possession is a big key for FC Dallas. The way things look to be lining up the two midfields are fairly evenly matched. A lot will come down to Lindpere and former FC Dallas midfielder Dax McCarty. Dallas has to lock down this midfield four of New York and keep their wing play at a minimum. The speed of Dallas could also play a factor in this one as well with Zach Loyd and Jair Benitez going forward.

He's leading the league in scoring for a reason. Must. Stop. This. Man.

Everyone loves them some Tim Ream here but boy he can cough up some bad plays too. Pressure him early, get him rattled and go from there. 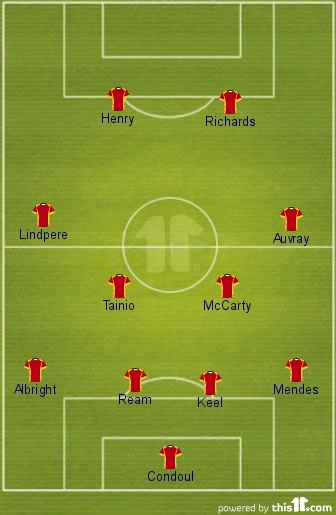 Notes: This lineup came from the game notes. With Ream on the injury list, there is a slight possibility he won't start. On the flip side we could also see Rodger return from injury in this one as well and start with Richards getting shifted back to the midfield with Auvray going to the bench.

One thing is certain, three points are an absolute must in this one. For both teams really. The Red Bulls are running out of chances to be in the playoff race, so they are desperate. Dallas is in need of points so they can stay on top of things in the West in regards to holding off Colorado and Salt Lake.

The form of both clubs has been lacking recently but at least for Dallas, they've won a couple games since their last meeting with the Red Bulls. Santos needs a big game, as does Jackson and Villar. The key in all of it could end up being Daniel Cruz though. If he doesn't step up tomorrow, it could be a long evening that ends up in a loss or a draw.