There's just six games left in the FC Dallas season and with the year winding down I think it's appropriate to keep weekly tabs on the playoff picture as we come down to the end of the season. It's not nearly as comfortable reading, especially after FCD's key loss at New England this weekend. 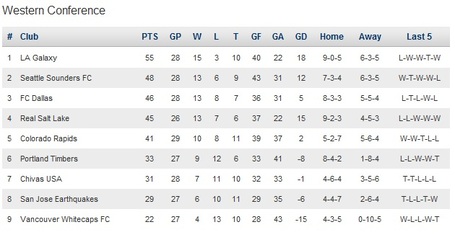 This is obviously the main goal at this point in the season. What looked to once be a formality, with FCD sitting comfortably in second ahead of Seattle and well ahead of Real Salt Lake, has deteriorated into a dogfight for those two first round bye spots available under Los Angeles. As you can see from the form guide, Dallas has dropped 6 points to Seattle and 5 points to RSL in the last 5 games. It's not pretty reading considering RSL has two games in hand on Dallas.

There is one interesting aspect to everything and that is the possible advantage of finishing fourth overall. In Dallas', situation, a fourth place overall finish in MLS would mean playing an extra wild card game at home against the last team into the playoffs(Possibly a juicy matchup against Houston). While this wouldn't be ideal, they would then be headed to the Eastern Conference playoff bracket as the bottom overall seed will play at the Supporter's Shield winners, almost certainly Los Angeles, while the other wild card which would be Dallas goes to the Eastern Conference bracket.

I don't know about you, but going through Kansas City, Columbus and Philadelphia sounds a heck of a lot better than going through Los Angeles, Seattle and Salt Lake.

Lots of things to keep track of as we head into the business end of the season...