A lot has changed between the Los Angeles Galaxy and FC Dallas since their May 1 meeting. Both clubs have done very well since that game as the Galaxy went on a 14-game unbeaten run that came to an end this past Wednesday in Portland, while Dallas only lost two games in a brutal stretch of games between May and July.

So here we are in August, both teams are set to get into the CONCACAF Champions League group stage here in the coming weeks and both are at the top of the MLS table. A win as we know for Dallas would push them into a tie for first place overall (I can't remember the tie-breakers but if it were based first on head-to-head Dallas would be in the lead).

This game had a lot of build up to it, but that was before Portland disbanded this club 3-0 on Wednesday. Still a 1 v 2 on a weekend without many big games should push this one to the top of everyone's viewing list.

(Read on for thoughts, questions, potential line ups and more)

1. Gas in the tank. On paper, you have to think the Galaxy have a little more steam in their engine based on the fact that they didn't have a CCL play-in round to deal with over these last two weeks. But, they're banged up just as much as Dallas is here and you have to probably consider both teams even in terms of energy here. The big thing to look out for is how Brek Shea is for this one. He was subbed out early on Wednesday versus Alianza and he did not practice on Tuesday due to headaches. I'd imagine he'll be good to go here as the club hasn't even listed him as "probable" or anything like that on the injury list for this game.

2. The new additions and what they could bring. While getting both Daniel Cruz and Maicon Santos this week should boost the offense a bit, there is a question as to whether or not we'll see them here this weekend. My gut tells me that even if all the paperwork is done and taken care of we'll only see one or both of them in a late cameo kind of appearance. It will take some time for both to get acclimated with their new teammates for the the guys already with the team to get used to them.

3. Stopping the service, will a return from Andrew Jacobson help? One of the biggest questions on my mind for Dallas is will Andrew Jacobson be available for this one? If he is then that spells good news for Dallas for when it comes to free kicks from the Galaxy or even just the normal 50-50 ball in the air. Jacobson brings some size and physicalness to the midfield that you just don't see out of Ricardo Villar. Going up against guys like David Beckham, Juninho and Michael Stephens in the midfield for the Galaxy, Dallas will need someone who can control the air. If Jacobson is still out, then the club has to limit the amount of free kicks outside the penalty box for LA.

Donovan was recently move to the forward position in hopes of getting more offense going. While it looked great in Vancouver for them, their stop in Portland did nothing for the offense. Mainly Bruce Arena was hoping that Donovan could get more out of Juan Pablo Angel.

I've been a big fan of his for a while now as he helped carry the load last year when Donovan, Edson Buddle and others were out for the World Cup. He's still young and prone to mistakes in the midfield so hopefully Dallas can force him into mistakes. 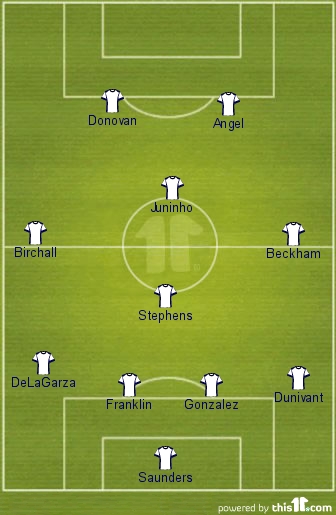 Notes: This is based off their lineup on Wednesday. Keeper Donovan Ricketts is still out, so Josh Saunders gets in. We could see Donovan get shifted back to the midfield and Mike Magee start over Chris Birchall in this game. Other than that I don't see too many changes for Bruce Arena's club.

As we know this is big month for Dallas. Getting any points in LA is a win for me here as this month's schedule sees a lot of tough road games. LA getting knocked off on Wednesday helps Dallas though. It pretty much killed any momentum for LA going into this game and made this a fairly level playing ground for Dallas on the road. I still believe Dallas matches up very well against LA and poses a lot of issues for them all over the pitch. As long as Shea, Marvin Chavez, and others have the gas in the tank to push them with speed, we should see a good result here this weekend.