Richard Sanchez: The Next Hispanic Face of FC Dallas

Share All sharing options for: Richard Sanchez: The Next Hispanic Face of FC Dallas

For years, hispanic fans in Dallas have clamored for their hometown club to sign a star Mexican player while others have speculated that the attendance problems in Frisco would be cured by bringing in the first big name Mexican since 1996. What if I told you then that perhaps the biggest Mexican name on FC Dallas since Hugo Sanchez is an American-born goalkeeper who played in front of 100,000 screaming fans at Estadio Azteca before ever putting on an FCD jersey in a competitive match? Meet Richard Sanchez, AKA Tex-Tex, the 17-year-old hispanic face of FC Dallas.

Sanchez had just completed a 3-0 shutout of DC United in the semifinals of the Generation Adidas Cup, his first competition with FC Dallas since winning the U17 World Cup. Suddenly as Tex-Tex went straight to the water cooler on this sweltering evening, he was surrounded by a mob generally reserved for players like Brek Shea, Kevin Hartman and David Ferreira.

However, these fans were wearing the red and white of Chivas(the most popular club team in Mexico), not FC Dallas, as it was the U15 Chivas USA team that surrounded the young goalkeeper after the game. This tells you all you need to know about the marketing appeal of FCD's homegrown signing. With the aplomb of a player twice his age, Sanchez posed for every picture, answered every question and even signed an autograph or two.

"Yeah, it's a little crazy," said Sanchez, a relatively quiet kid who talks more on the field than he does in a press conference. "I don't know, it's cool."

The typical response you'd expect from a kid his age. However, when Sanchez is surrounded by reporters and cameras he shows that his father was not only his first goalkeeping coach but also his first publicist instilling a quiet humbleness in the youngster, a PR director's dream.

"It’s awesome to be back with my family and friends. I feel at home," said Richard. "I missed them a lot and to be back is something great."

The rise of Sanchez from relative unknown to Mexican youth star has been a quite precipitous one. Signed by FC Dallas as their sixth homegrown player, some questioned why Dallas would spend money on a then 16-year-old goalkeeper, a position where players may not hit their peak until at least a decade later. However, FC Dallas faces unique challenges with their Mexico-eligible players as the big bucks of Mexican clubs many times forces the hand of an MLS club quite early to get their players inked to a deal rather than risk losing them for free if they choose to head south of the border.

Sanchez was almost an unknown to all but the most ardent FC Dallas fans, spending the majority of his time training with the Mexico Under-17 National Team rather than with his club team. It's likely Sanchez wasn't asked for a picture or autograph inside Pizza Hut Park much less on the street. Everything changed once the kid from Mission Hills, California pulled on the verde of El Tri at the big stage of the Under-17 World Cup played at home in Mexico, earning him the nickname of Tex-Tex.

"That’s from a cartoon in Mexico called Super Campeones in which the goalkeeper happens to be called Tex-Tex," explains Sanchez. "His name is Richard so they gave me that nickname and it’s here now."

However, it was the chants of por-ter-o that rang through the field as Sanchez saved a penalty kick in the final group stage game, a late victory over Netherlands. Mexico cruised through the quarterfinals against Panama to set up a semifinal showdown against world youth powerhouse Germany. In a game for the ages, Mexico defeated Germany 3-2 on a late bicycle kick goal by Julio Gomez in a game that would have never been that close save for Richard Sanchez's heroics in the Mexico goal.

"I walked onto the field to start my warm-up. As soon as I looked up, there it was. The massive stadium filled with more than 100,000 people in green right before my eyes," said Sanchez. "I walked towards the center circle and made sure I took a good look around the stadium. The world has many beautiful places and many colossal figures, but this was just a sight to see."

The final against Uruguay in front of 100,000 screaming fans at the legendary Estadio Azteca was a mere formality. El Tri rolled over the South Americans 2-0 with Sanchez keeping a clean sheet in goal. Mexico had found their new heroes and leading them was a tall kid dressed in an all-yellow kit, the only major contributor that plays his club football outside of the country.

"They placed the trophy in Antonio's hands and he raised it up into the sky! 'CAMPEONES DEL MUNDO,' I thought." wrote Sanchez in a goosebump-inducing blog posted on the FC Dallas website.  "We walked off the stage, and my family was there. They were all very happy! My parents got really emotional and so did my brother. It was an incredible moment!"

The outer fields of Pizza Hut Park are a far cry from Estadio Azteca, but just as important to the young goalkeeper's development. As with any young 'keeper, it's about getting as many games under your belt as possible to gain the experience that can only be learned from facing tough opposition.

"I've gained a lot of experience that's for sure," said Sanchez about playing in the Generation Adidas Cup, MLS' league-wide annual U17 tournament.

Sanchez has his eyes set on much larger goals, however, as he tries to break into an FC Dallas stable of goalies led by Kevin Hartman. The sky is the limit for Tex-Tex who is closely watching  the Under-20 World Cup currently taking place in Colombia knowing he could be between the pipes in that same tournament two years from now.

"I want to play with the first team debut somehow. I know that to accomplish that goal I need to work hard and keep training day after day," said Sanchez on what he is currently focused on. "I’m looking towards [the Under-20 World Cup] as well. I have two years to look forward to that so I have to start working now."

It could be years before the 17-year-old takes the field at Pizza Hut Park in a competitive game, but don't be surprised to see Richard "Tex-Tex" Sanchez as one of the faces of the club in Hispanic markets. Who needs to spend big bucks on Mexican internationals when you've got one in your own backyard? 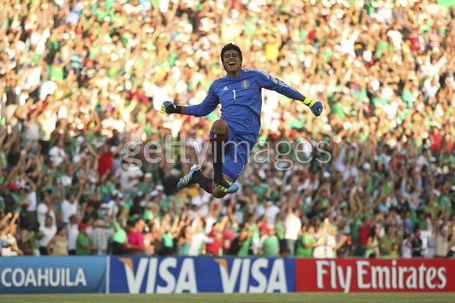